Junkers Ju 87 dive-bomber.
Service performance and comparison to other dive-bombers, many pictures and animated 3D model of a Ju 87B in the Western Desert.

back to Part I: History and specifications of the Stuka

The Junkers Ju 87, commonly known as Stuka (short of ‘Sturzkampfbomber’, the German word for dive-bomber), is one of the classic military aircraft of aviation history.
The name Stuka, together with the ‘Panzer’ (tank) is equal with the modern vision of the ‘Blitzkrieg’ (Lightning War). This was no coincidence, because the two were very close together as a combined weapon team, the Stuka’s being the ‘flying artillery’, which could crush any hostile base, defense position or troop concentration that could have hindered the advance of the ‘Panzertruppe’ (armored forces).

In this respect, the Ju 87 was always a ground combat aircraft. It was a tactical bomber, who supported the ground groups of the Wehrmacht and not a strategic bomber. The successes of the Stuka also extended to a multitude of other targets, including ships, airfields, railway stations, bridges, and other strategic objectives, which were, however, only secondary to the main task of working together with the German ground units in the main direction of the advance.

Under the cover of own air superiority, the Ju 87 was undoubtedly the deadliest and most morally effective ground combat aircraft of all the armed forces during the first half of WW2.
The main reason for this was, on the one hand, the accuracy with which an experienced Stuka pilot could deliver a 500 (1,100lb) kg bomb at the target, as well as the considerable problem for anti-aircraft gunners who were attempting to shoot an airplane at a deep horizontal angle of 5°.
It is a remarkable fact that no other aircraft deployed during the WW2 could deliver large or small bombs on a target with such regular accuracy. The Stuka pilots were so capable that they were often assigned by the tactical air-force connecting groups in the army units by radio to destroy some selected buildings, bunkers, artillery positions or even digged in enemy tanks.
It was not uncommon for their dive-bombing attacks to be flown only a few hundred yards from their own advancing ground units. 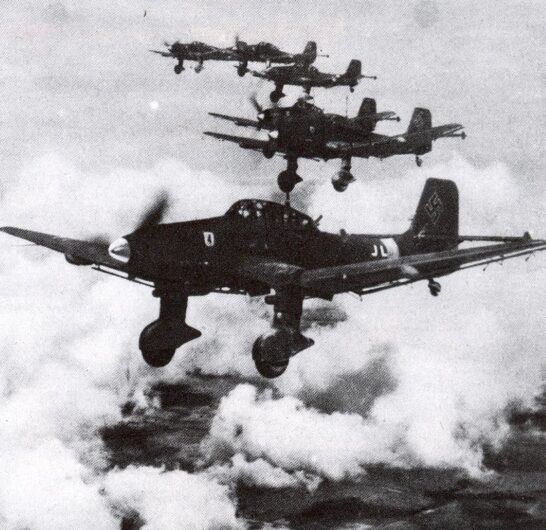 A swarm of Junkers Ju 87 Stuka dive bombers. They were used in large numbers during the initial part of World War 2, and came to symbolise the concept of close support air operations for Blitzkrieg attacks by army Panzer formations.

This Ju 87R is seen in Norway in April 1940. Then a new model, it carried extra fuel plus underwing tanks and was a ship destroyer. 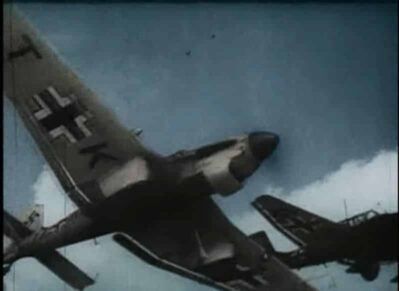 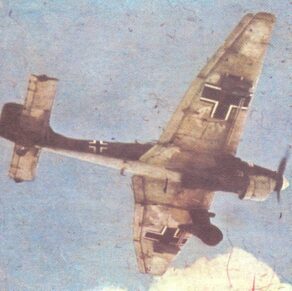 Picture of a Junkers Ju 87 Stuka in the time of the Battle of Britain, taken from a propaganda colour movie. 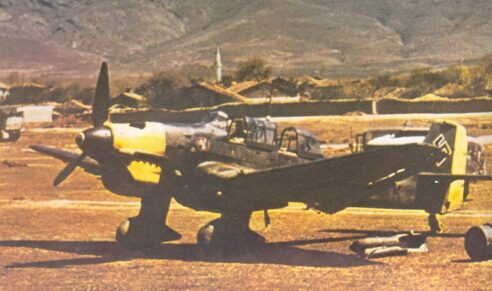 Flanked by a 1,102lb SC500 bomb, this Ju 87 B Stuka is seen on a Greek airfield during the Blitzkrieg campaign on the Balkans. This was the last campaign in which the Ju 87 demolished its targets and encountered little opposition. 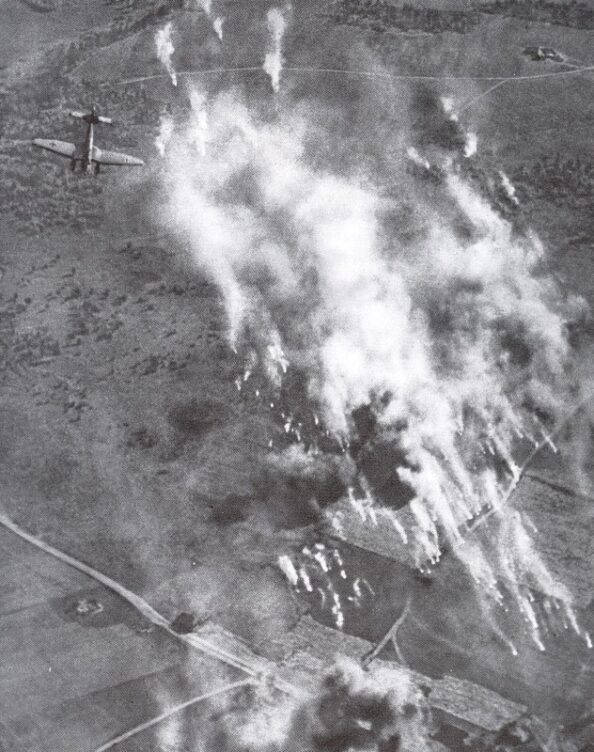 Autumn 1941, on a road to Moscow. A German Stuka attacks field fortifications of the outer defence with board weapons. A hail of 2-inch high explosive shells goes down to the Soviet positions. 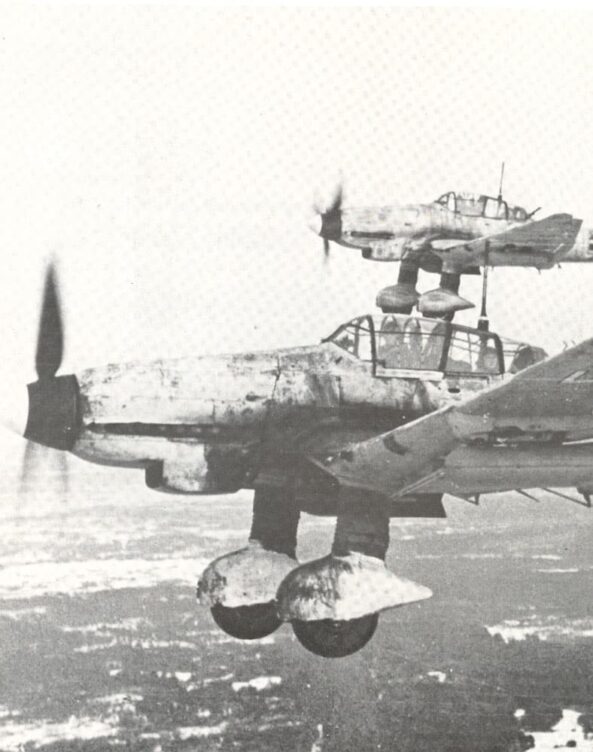 Dive bombers of IIIrd Group of Sturzkampfgeschwader 1 photographed at a forward landing ground near the River Dnieper in Russia during 1943. 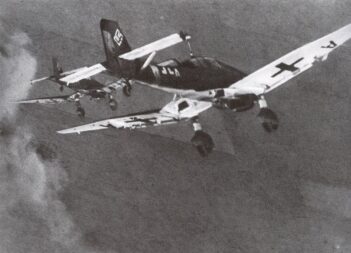 At the 1000 miles long Eastern Front the German Luftwaffe was in continuous stress. The Stuka Squadrons played an increasing role of a ‘flying fire brigade’, from one point to the other on the whole front line. 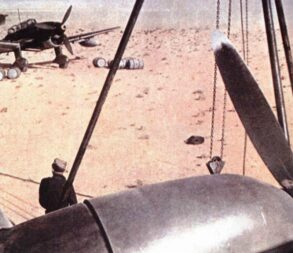 Airfield with Ju 87 dive bombers in the desert. 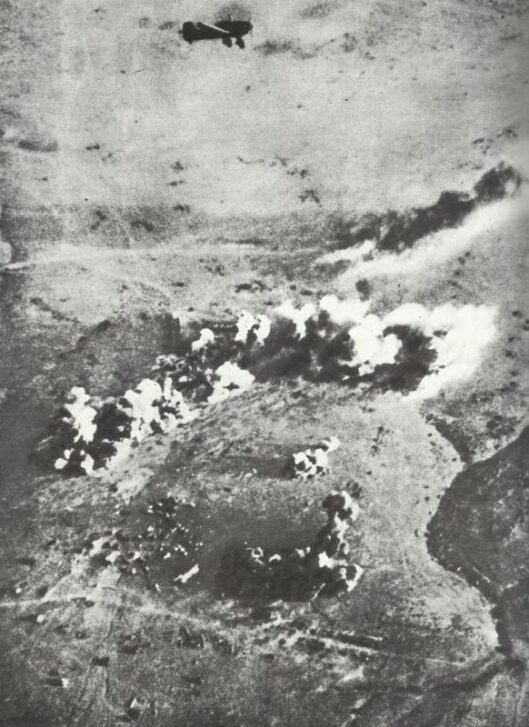 A Ju 87 Stuka (above) over the port of Tobruk. The clouds of the explosion of the bombs are clearly visible.

The ground crew of a Stuka dive-bomber enojoys the first spring sun in Southern Italy. 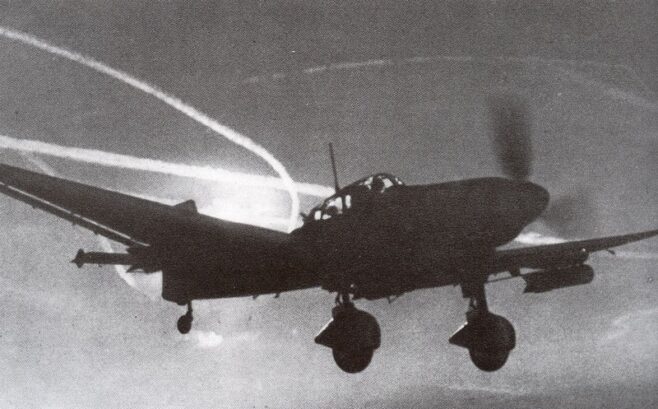 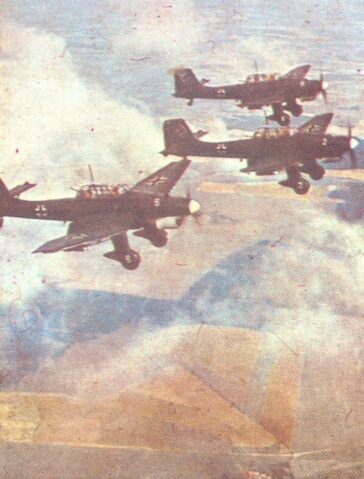 Ju 87 Stukas on the way to a target during the Battle of Britain. 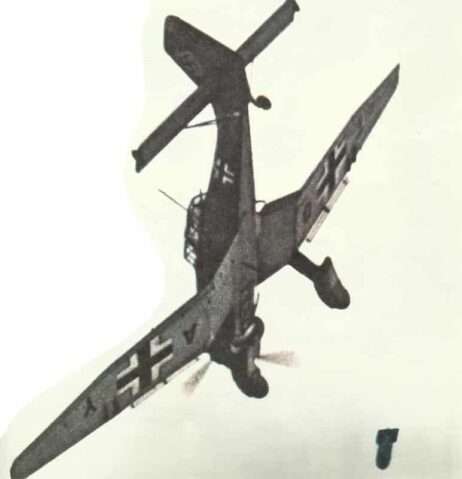 A Stuka dive-bomber drops its bomb on the target. 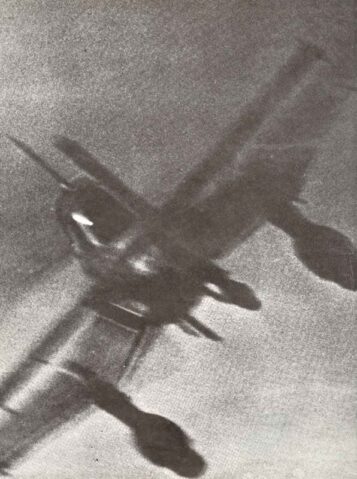 A Junkers Ju 87 Stuka dive-bomber shortly before it was shot down by a RAF fighter. 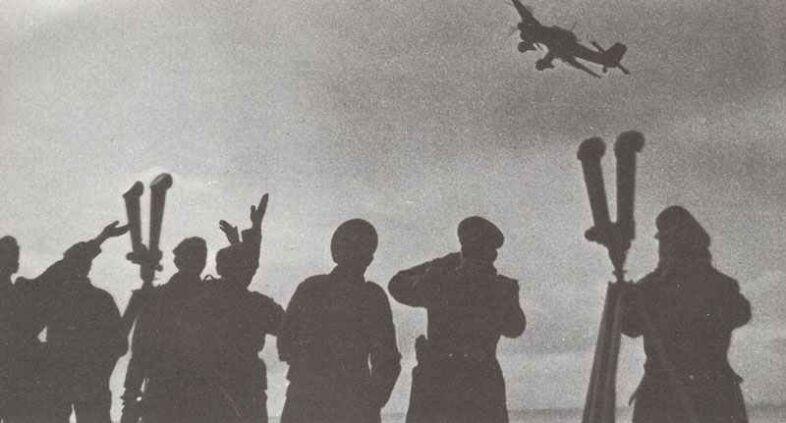 Picture from this day at the French coast near Cape Griz Nez, the staff of Luftflotte 3 waves to a Ju 87 Stuka dive-bomber. 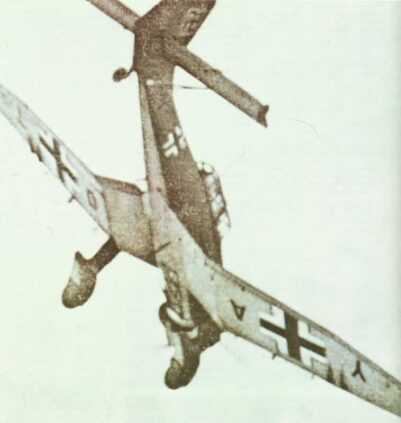 Dive attack of a Stuka during the Battle of Britain. 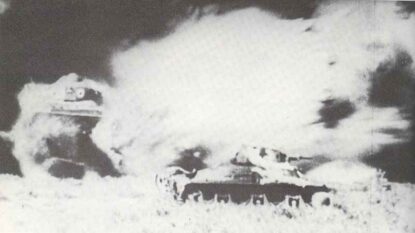 One of the French tanks was hurled into the air by a direct hit of a bomb from a Stuka dive-bomber. 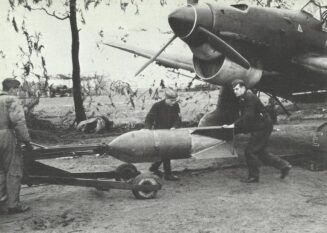 A German Stuka is bombed-up during the ‘Blitz over France’. 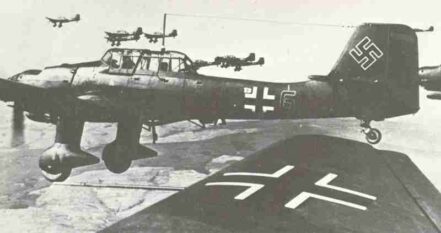 No aircraft better typified the Luftwaffe at the beginning of WW2 than the Ju 87B dive-bomber – the infamous Stuka . 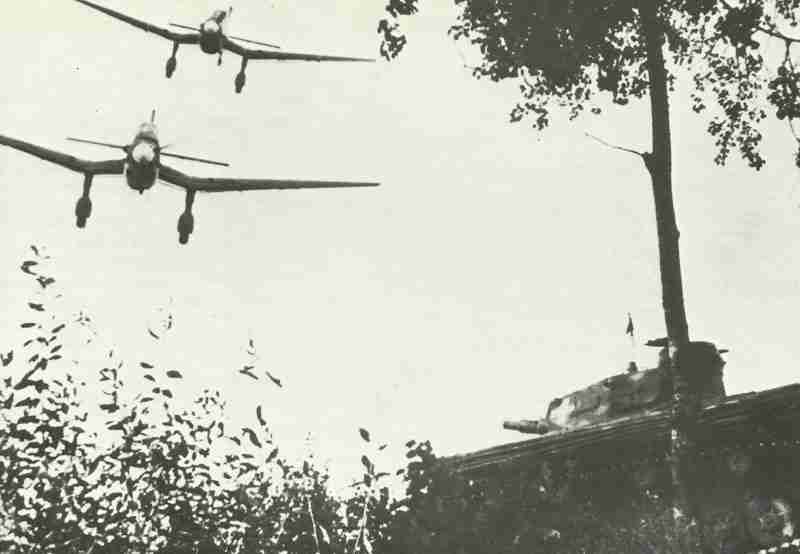 Stukas flying across a German Panzer IV tanks during the campaign in Poland.

The Ju 87 was so deadly accurate, because their construction of the airframe and its stability allowed an extreme dive bombing tactics. In addition, the design had an effective aiming mechanism and an automatic system for recovering from the dive.

When approaching the target, the pilot set the bomb release height in a device that automatically triggers the bombs and pulls the aircraft out of the dive into the vertical.
The large bomb under the fuselage was automatically swung out with the suspension to avoid contact with the propeller in the almost vertical fall. The pilot then throttled the engine and extended the dive brakes, which were at the front edges of the wings, which automatically activated the trim tabs on the elevator and the aircraft entered the dive.
Red lines on the side windows helped the pilot set the right dive angle, and he could concentrate on keeping the target in his sight.

Upon reaching the pre-selected altitude, the bomb was released and an automatic device to pull out of the dive adjusted the trim tabs and the nose of the aircraft lifted over the horizon. The pilot then took control again after the dive, opened the engine throttling and closed the dive brakes.
The strength of the airframe and the wings of the Ju 87 usually enabled forces of more than 6g to be pulled out of the dive.


Comparison to other aircraft

The only other airplanes used during WW2 that may have reached the bombing accuracy of the Ju 87 are the Japanese Aichi D3A (Val) and the American Douglas SBD Dauntless dive bomber.
The later Curtiss SB2C Helldiver used in the war from the end of 1943 was designed for a higher horizontal speed, and although it was also used as a dive-bomber, its design was similar to that of a multi-purpose naval aircraft.

Both the Val and the Dauntless were designed around the same time as the Stuka in the mid-1930s, but were primarily intended for attack on enemy ships. In this role, both were successful, but they could not operate like the Stuka effectively under strong enemy air superiority.

However, both the Val and the Dauntless were quite ineffective if they were to be used in some way for ground attacks. They could not hit smaller ground targets effectively, especially under enemy air defense fire. They could not fly the dive-attack in such a strong angle as the Ju 87.
Neither the Val nor the Dauntless had the strength of the inverted ‘gull’ wing to pull out of the almost vertical dive at low altitudes and at high speed and their dive aiming and automatic equipment for pull out of the dive was not so advanced.