There were 13 prototypes, of which the V1 first flew in spring 1935; the V 2, V 4 and V 11 were, respectively, the basic development aircraft for Fw 58A, B and C production series.

Only a few Fw 58As were built, the Fw 58B being essentially an improved A with a glazed nose mounting for one 7.92 mm MG 15 machine­ gun. A second MG 15 was ring-mounted aft of the crew cabin, and the Fw 58B could also carry twelve 10 kg bombs, some being used in an anti-partisan role in Bulgaria in 1944.

This is the first Fw 587A-0, used later by the Focke-Wulf company to ferry Kurt Tank, the chief designer.

An Fw 58G-1 ‘Leukoplast bomber’, as an ambulance plane with red cross markings. 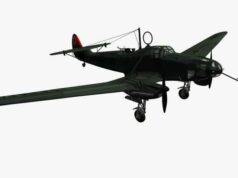