Slovak Armed Forces in the Second World War: organization of the Army and divisions and Air Force in the Polish campaign 1939 and on the Russian front 1941-1944.

In March 1939 Hitler summoned the leaders of the Slovak populist party to Berlin and told them that unless they broke away from Czechoslovakia, he would allow the Hungarians to invade their country. Slovakia declared itself independent on the next day, 14 March 1939.

Slovakia was allowed to maintain its own army (6 divisions), and inherited the Czechoslovakian equipment stored within its borders. Since the Slovak officers were all ex-Czechoslovakian army too, the new force bore a strong resemblance to that highly professional body, though the units had to be reorganized from scratch. One unusual feature was that the ‘Volksdeutsche’ (German origin) served in their own ‘closed’ formations, which at one point amounted to one artillery, one engineer and two infantry regiments.

The Slovak army had three infantry divisions by the time World War II broke out. It helped the Germans in their attack on Poland, and two divisions (the 1st and 3rd) occupied territory which the Slovaks claimed was theirs. This co-operation did much to establish Slovakia’s status as a loyal German ally and to avert the threat of a Hungarian take-over.

For the German invasion of the Soviet Union the Slovaks placed at the disposal of the Germans a light brigade of 3,500 men which was partially motorized and included a battalion of Czech light tanks (= PzKpfw 38(t) ), and an army corps of two infantry divisions and divisional troops. The total strength of the Slovak commitment in July 1941 was 40,393 men and 1,346 officers.

Change of position of Slovak artillery on the Eastern Front. 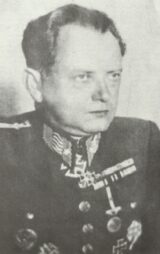 Major-General Agust Malar, commander of the Slovak Mobile Division from December 1941 to July 1942, one of the two Slovak officers to be awarded the German Knight’s Cross.

Sergant of the Slovak Army in 1942 with the special helmet markings of the Mobile Division. His rifle is the Czech version of the German Mauser carbine, designated VZ 24.

During August 1941 it was decided to send the infantry divisions back to Slovakia and to form a 10,000-strong Mobile Division and a 6,000-strong Security Division. These were placed under German operational control, though the administration remained wholly Slovak. The elite Mobile Division fought at Lemberg, at Kiev and on the Mius during the winter of 1941-42, where one German officer found the men to be ‘brave soldiers with very good discipline’. The Mobile Division was well thought of by the Germans and was used by them in a front-line role.

The Slovak units fighting on the Eastern Front suffered heavy casualties and in 1943 were whitdrawn to carry out security duties. Morale slumped, and both divisions began to lose men through desertion. In 1944, they were put into reserve, disarmed and converted into Construction Brigades. Meanwhile, the Slovaks had organized two new divisions (1st and 2nd Infantry) to defend the Carpathians. A third was forming in central Slovakia when the Partisan movement initiated a rising in late August 1944. This was premature from the army’s point of view, and the Germans were able to disarm the two field divisions.

The Slovak army used mainly Czechoslovakian equipment, though the Germans supplied some mortars and anti-tank, field and AA guns. The Slovak policy was one of rapid rotation between the Home Army and the divisions in Russia, and they even went so far as to discharge conscripts when their period of service was over throughout the war.

In the autumn of 1939 a German Luftwaffe mission arrived in Slovakia to undertake the modernization and re-organization of the Slovak Air Force. The Mobile Division was accompanied by a small air detachment consisting of two fighter squadrons equipped with Czech Avia B-534s and a reconnaissance group with Letov S328s.

In the summer of 1942 twenty combat-weary Bf109Es used by the Luftwaffe in Western Europe and North Africa were the first modern fighters issued to the Slovakian Air Force. Beginning in March 1943, new Bf109G were supplied as replacements by Germany.