Army uniforms of the Wehrmacht in the Second World War.
German insignia and special uniforms for the Western Desert an the Eastern Front.

The field-gray uniform of the Wehrmacht was a further development of the German uniform used during World War One. The final form of this uniform was introduced in several steps from 1935 onward.

In the German army there were two kinds of uniform: standard uniforms, which were issued by the Wehrmacht, or from the wearer personally at their own or state-cost tailor-made uniforms.
During the peace period and even during the first year of the war, tailor-made uniforms were often used by officers, but as these were found to be impractical, uncomfortable, and expensive to replace in combat, more and more standard uniforms were used.

The field-gray standard uniform was standardized in the army and consisted of the basic components steel helmet, side cap, field blouse, covering coat, trousers and march boots.
Mountain troops were given the same uniform, but the side cap was replaced by a mountain cap, as well as the pants and boots by long, baggy trousers with elastic leggings at ankles and mountain boots.

Mounted members of the army were represented not only in the cavalry, but mainly in the mass of the units, which still depended on horses for transport or reconnaissance. These men were given leather riding pants and heavy riding boots.

A special black uniform for the crews of closed combat vehicles was also introduced in 1935. This uniform consisted of a black, padded beret, which also served as a protective helmet, a two-breasted jacket and long baggy trousers.
This uniform, which was worn at first just with the vehicle, was at the same time practical and popular. The black color, which was supplemented by a silver skull insignia on the beret, had a dramatic appearance and added a little to the esprit of the young arm. Thus, from the beginning of 1940, this uniform was issued to the crews of the self-propelled guns in a field-gray version.

In general, the German clothing industry had achieved miracles to keep up with the expansion of the army, and German uniforms were a rare combination of tradition and modernity, comfort and convenience.
Nevertheless, there were not enough uniforms to completely equip the strong-growing German army. This led to the Germans using the captured uniforms of the Austrian, Czechoslovak, and Polish armies. These were sorted, stored, released from the respective national insignia and temporarily issued to German conscripts in order to bridge the deficiency.

The most important method of determining the rank of a member of the German army was through the system of the shoulder straps, which showed not only the rank of the wearer, but also the arm of service, formation, and status.
In addition, officers were recognized by their headgear, the peaked cap with silver chin cords, or a side cap with silver piping and the brown leather equipment.

All the non-commissioned officers wore the basic uniform of the soldiers, which was in contrast to many European armies, organized according to the French system, and where they wore an officer uniform. In the German army, the non-commissioned officers were recognized by silver tips on their uniform collar and shoulder strap. Ordinary soldiers wore their badges on the left sleeve.

The arms of service were indicated by different colors (for example golden-yellow in the cavalry), which were worn as piping on the peaked caps, chevrons of service on the front of the side cap, strips on the collar pieces and as piping and underlay on the shoulder straps. 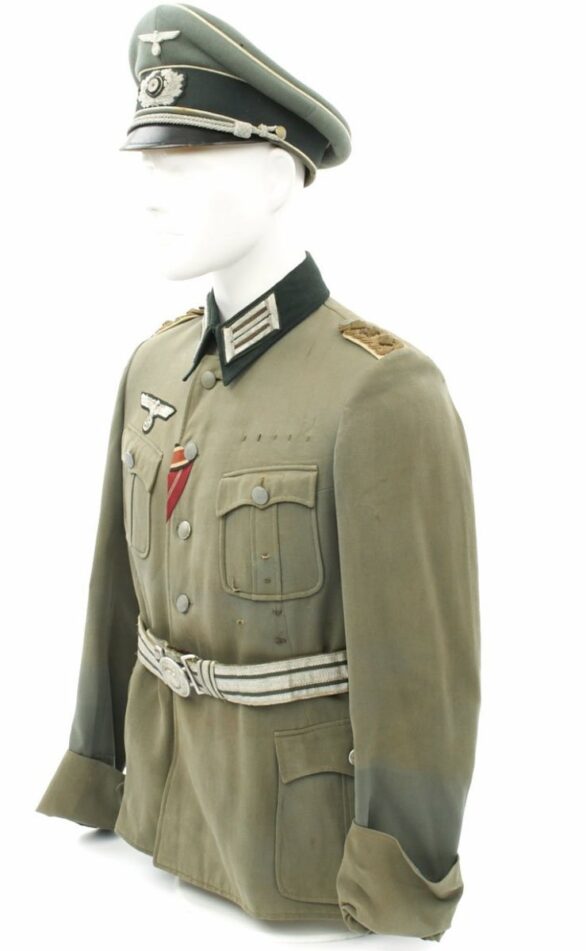 Uniform of an ‘Oberst’ (colonel) of the infantry. 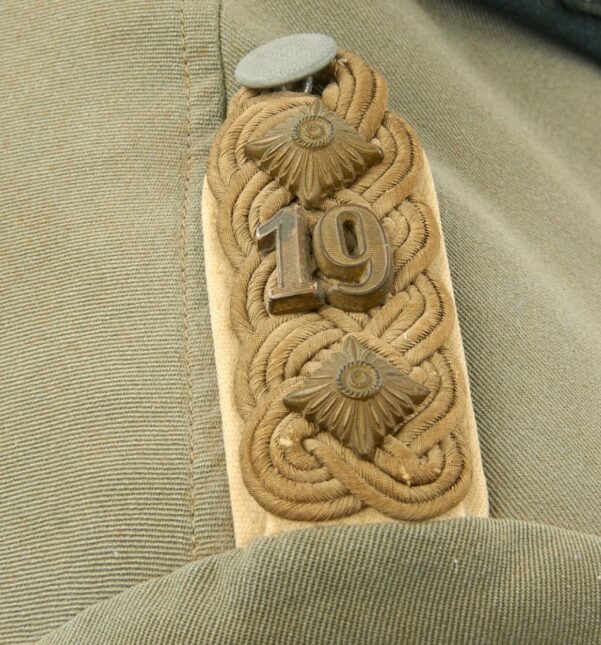 On the shoulder pieces are the regiment numbers. 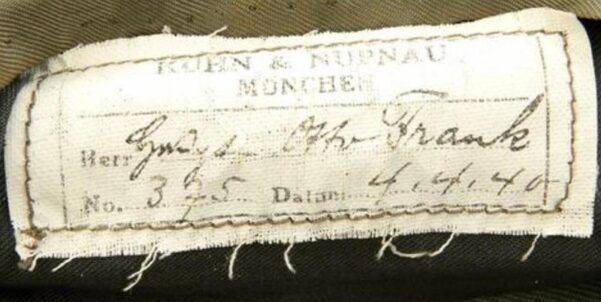 This collectible is a uniform of a Colonel of Infantry or Construction Pioneers due to the possibly faded background color of the shoulder pieces (light brown), due to the number on the shoulder pieces probably from the 19th Bavarian Infantry Regiment (7th Infantry Division, Munich) or the ‘Abschnittbaustab 19’ (Section Construction Staff 19), was delivered in April 1940 by the tailor Kuhn&Nupnau (owner deceased, company deleted) to a Mr. Otto Frank (illegible title).
Unfortunately, this person does not appear in the list of known commanders of the units in question. Perhaps one of the readers knows something more about it and deposited this thankfully in the comment function.

Awards and decorations were comparatively rare at the beginning of the war, limited to World War One, long service, Nazi party badge and from the Spanish Civil War.
It was, however, characteristic of the German soldier to carry his distinctions and decorations, even though he became a target for enemy snipers.

German uniforms in the Western Desert

In contrast to Great Britain, France, and Italy, Germany had no colonial empire, and when, at the end of 1940, it became apparent that the Wehrmacht would soon be involved in a desert war, a whole range of tropical clothing and equipment had to be designed practically overnight.
Without practical experience and under pressure of time, the Germans decided to copy uniforms from nations with a colonial empire.

When the first German troops landed in Tripoli in February 1941, they exchanged their field-gray uniforms for tropical uniforms. With their great sun helmets, well-cut vests and trousers and laced field boots, they could not conceal how British soldiers appear in India during the pre-war period.
Soon, however, the Germans discovered that their pseudo-functional uniform, which was actually quite well-chosen according to Northern European standards, had little in common with the light and somewhat sloppy dress of the natives and colonial troops.

So it took not long before the German troops recognized the functional limitations of their rather restrictive clothes, and sun helmets, the laced field boots, the close-fitting field blouse and trousers disappeared into their luggage.

Thus, the German soldiers in the desert began to assemble their own uniforms, which were most practical for them. From now on, the typical appearance of a German desert fighter consisted of a field cap with a large umbrella protecting the eyes from the burning sun. This includes a shirt, long trousers up to the ankles or shorts, woolen socks, canvas and leather boots.

The German field blouse was still worn, but this was not as pleasant as the Italian Saharina, which the German soldiers soon procured for themselves.

The crews of the armored vehicles received a tropical variant of the side cap, which was better suited for use inside the tank than the field cap with the large umbrella.

As the temperatures in the desert quickly declined during the night, the soldiers wore a knitted woolen waist protector over their skin and woolen coats worn over the other clothing.

The German supply officers were concerned above all with sufficient supplies of steel helmets and wool sweaters, since both were regarded as essential for the desert war.

The rank-badges were the same as in the normal uniforms of the army, although the aluminum-colored NCO lace was replaced by a yellow-brown one.
Officially, all the ranks and officers were to wear the usual rank badges, but in practice many officers and even generals continued to use the ranking badges, which were present on their tempered uniforms.
Also, the color of the arms of service was the same as before described with the field gray standard uniform of the Wehrmacht.

Uniforms on the Eastern Front

At the beginning of Operation Barbarossa, the invasion of Russia, the German uniform was fundamentally the same as at the beginning of the war.
However, some rationalization measures introduced at the outbreak of war also reached the troops. The most important changes were that the army uniforms were beginning to lose the dark bluish-green badge cloth, which had been worn on the field blouse and greatcoat collar as well as on the shoulder straps and the rank badges on the sleeve. Instead, field gray was now used as a badge cloth.
The gray trousers became less frequent because the new specimens were made of field-gray material, and the white or silver threads used in the insignia and rank distinction were replaced by a color called mouse-gray.

The extreme climate with which the German troops were confronted in Russia, the lack of detergents or repair facilities and the difficulties in transporting spare clothing to the front, led to a clear and rapid deterioration in the appearance of the German soldier on the Eastern Front.
Officers were equally affected and went to wear standard uniforms and leave their tailor-made field blouses, gray trousers and high boots in their luggage.

The first winter was a catastrophe which hit the German soldiers in open terrain at temperatures of up to -35 degrees below freezing, with little more than their existing standard field uniforms.
No winter clothing were spent, and the soldiers were compelled to stuff newspapers under their blouses and fill their boots with straw.

A Winter equipment was designed in time for the second winter in Russia and was then a masterpiece, both in its rapid development and in its mass production.
With its special underwear, weather-resistant features and two different camouflage colors on the top and bottom (one side was always white for the winter, the other one in two possible camouflage patterns or field gray), this uniform became the first modern combat suit, which is today worldwide standard.
Its only disadvantage was the weight, which would not be acceptable according to today’s standards. And for an inexplicable reason the soldiers of the Waffen-SS only received their own model of the combat suit with the SS camouflage pattern in the last winter of the war.

During the summer on the Eastern Front, officers wore light field blouses of linen or captured shirts of the Red Army, while other ranks used different types of working clothes.
Gradually the conservative German army accepted open collars as permissible summer uniforms. From 1943, the various, collarless shirts used in the German armies on the Eastern Front were replaced by a standard model in field-gray.

Another development was the increasing spread of protective clothing, such as the one-piece coating, which was spent on armor and artillery members. Then, camouflage covers for steel helmets and gowns were issued, following the model in the Waffen-SS. But there was never enough to equip all soldiers in the army.

The only new badge introduced for the entire German army were special rank insignia for uniforms without shoulder pieces (mostly camouflage suits). Except for the two ranks of the SS-Oberfuehrer and field marshals of the army, these insignia were identical to those used in the Army and Waffen-SS.

4 thoughts on “German uniforms of WW2”