The Totenkopf (Death’s Head) Division had its origins in the highly infamous units that guarded the concentration camps. These SS-Totenkopf-Standarten took over the supervision of these camps from the SA in 1934.

The head of the concentration camp inspection was the equally disreputable Theodor Eicke. SS regiments were set up and stationed at the various camps. The Standarte I ‘Upper Bavaria’ in Dachau, Standarte II ‘Brandenburg’ in Oranienburg, Standarte III ‘Thuringia’ near Buchenwald and Standarte IV ‘Ostmark’ near Mauthausen.
These different elements of the SS Totenkopf were summarized under the term SS-Totenkopfverbaende, or SS-TV in short.

The SS Totenkopf units were actually considered too inferior for the SS-Verfuegungstruppe (disposal force) combat force. Service with the SS disposal force meant for its members to have also the ability for the military service – for the Totenkopf members this was considered as not given.
Nevertheless, Eicke had great ambitions for his Totenkopf soldiers. Gradually he got rid of the worst elements and improved the military abilities of the others. However, as the troops were considered to be internal security personnel, they were given low priorities in terms of personnel and equipment and depended on second-rate material or captured weapons.

At the beginning of the Second World War, the Standarte ‘Upper Bavaria’,’Thuringia’ and ‘Brandenburg’ were sent to Poland to quell any resistance in the conquered areas. This generally led to the Totenkopf soldiers helping the brutal SD (security) task forces to round-up Jews and other ‘undesirables elements’ behind the front.
In the Bydgoszec area alone, parts of the ‘Brandenburg’ Standarte executed 800 ‘suspicious’ Poles within only two days. The horrific behavior of the Totenkopf units in Poland led to fierce complaints by the Wehrmacht, but all of them were pushed aside by those in charge.

In November 1939 Hitler even decided that the various Totenkopf regiments should be merged into a third SS division.

Since mid-October 1939, the Totenkopf Division in Wehrkreis VII has been set up as a horse-drawn infantry division by Gruppenführer Eicke as ‘Inspector of the SS Totenkopf Units’ from the younger soldiers of the existing four SS Standarten.
Problems with discipline were still widespread, despite Eicke’s brutal reactions to disobedience or insubordination.
Training continued in the first months of 1940, but the new SS Totenkopf Division had a great shortage of vehicles and heavy equipment. As a result, Eicke had to beg, borrow and practically even steal this equipment in order to bring his unit up to its nominal strength.
The division was finally placed under the 2nd Army for the Western campaign.

The division was assembled in the Cologne area and was initially held back as a reserve of the AOK 6 due to Eicke’s displeasure. Only one week after the beginning of the Western campaign, the Totenkopf Division was sent into action. She marched through South Holland and Belgium to France via La Cateau to Cambrai.
The first battle took place northeast of Cambrai, where the division brought in over 16,000 prisoners of war. The division’s dubious reputation was once again confirmed by the murder of Moroccan PoWs of the French Army as ‘racially inferior’.

The Totenkopf Division was then ordered forward to reinforce the German units that had broken through to the Channel Coast and cut off the BEF and other Allied units from the main French force in the south.

In fact, the main force of these trapped troops hit the SS Totenkopf Division directly in their attempt to break out to the south. The light anti-tank weapons, which the Death’s Head soldiers only had, were no match for the allied tanks – including heavily armored Matilda II tanks – and the SS troops suffered great losses. Eickes men had to fight the enemy tanks with heavy artillery in direct fire and only the intervention of Stukas saved the day. The division was on the verge of collapse.

The Totenkopf Division was then ordered to advance to the La Bassee Canal and to identify and secure suitable points for crossing for the main force of the German advance.
Eicke ignored these commands and went beyond the channel, where he encountered fierce resistance. At that time Hitler issued his ‘stop order’ and Eicke was ordered to give up his hard-won bridgehead and withdraw his troops. His unequivocal refusal to obey these clear instructions led to an angry accusation by General Hoepner, who described him as a’ butcher’ who had no respect for the lives of his own men.

Two days later the advance could be resumed and Eicke was forced to conquer the area for the second time, which he had to give up in the meantime and suffered heavy losses again.
His division then met further fierce resistance at Bethune and La Paradis, where the British defenders demanded a high blood toll from the SS men for every yard they won.
When the defenders of La Paradis finally ran out of ammunition on May 27th and had to surrender, about one hundred prisoners of the 2nd Royal Norfolks were rounded up in front of a barn and shot with machine guns. Although the SS soldiers went with bayonets between the shot victims to kill every survivor, three British escaped alive. Based on their testimonies, the company commander, SS-Obersturmführer Fritz Knöchlein, was hanged for war crimes in 1948.

In early June Totenkopf served in the coastal protection around Gravelines, south of Dunkirk. Then, as part of the XIV army corps, attack in the Peronne area and then breakthrough through the ‘Weygand Line’ to the Seine around Peronne.
In the last days of the campaign, the SS-Totenkopf-Division followed the French troops into the area north of Lyon. Among the French soldiers were also Moroccan units again and also in these last fights the Death’s Head soldiers captured again only white men.
After the armistice in July 1940, the division began securing the coastline from the Garonne to the Spanish border.

During the Western campaign, the Totenkopf Division suffered much higher losses than the other SS units, which earned it a reputation of outstanding ruthlessness even towards its own men. Eicke’s division alone lost over 300 officers in ten days of combat. The ‘human material’, which until then consisted mainly of criminals and SS reservists without sufficient military training, was an explanation for the high losses and brutal behavior towards PoWs, but also Eicke’s ambitions towards his division were responsible.

After the armistice, from July 1940 the division did coastal protection in the section from the Garonne to the Spanish border for almost a whole year. This was a different picture of their men, who were so aggressive in battle when they helped the local farmers bring in the harvest.

During this time, the division also formally became part of the Waffen-SS and received extensive replacement and equipment. The new recruits now consisted of young SS volunteers who had no contact with the concentration camp guards.
In autumn 1940 the SS Totenkopf Division was completely motorized and became a motorized infantry division – Inf.Div(mot) for short – and received the motorcycles’ battalion ‘Totenkopf’ and a III (schw)/Art.Rgt. (tmot) ‘Totenkopf’ (heavy artillery regiment).

In spring 1941 the division was moved to East Prussia in preparation for Operation Barbarossa. There she received the new Pz.Jäger-Abt.’T’ with three coys s.Pak/5cm(mot.) (anti-tank unit with 5cm AT guns) and as fourth company a 2cm-Fla.Kp(mot.) (2-cm Flak anti-aircraft coy).

For the attack on the Soviet Union, the division was assigned to the Army Group North and was initially again only reserve with the Panzer Group 4 of Hoepner. In the second wave, it advanced through Lithuania via Daugavpils to Latvia, where it cleared the advance roads of retarded Russian troops.

At the so-called ‘Stalin-Line’ the first heavy fights took place. Eicke was wounded there when his staff car ran over a mine. The Totenkopf Division encountered unexpectedly strong resistance and suffered considerable losses.
Despite these fierce battles, officer losses this time amounted to 82 within a month, compared with 300 within ten days in France. Also, this time a larger number of prisoners were captured alive in a short period than had been the case in the entire Western campaign together. Clearly, the soldiers of the Totenkopf Division had learned from their earlier mistakes. 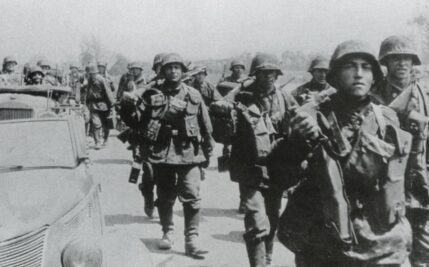 The Totenkopf Division’s advance into Russia in the summer of 1941. 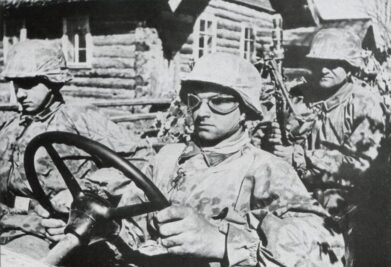 The crew of a amphibious car of the SS-Totenkopf-Division in the Baltic States. 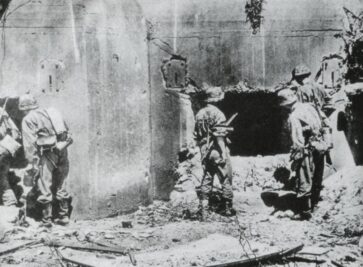 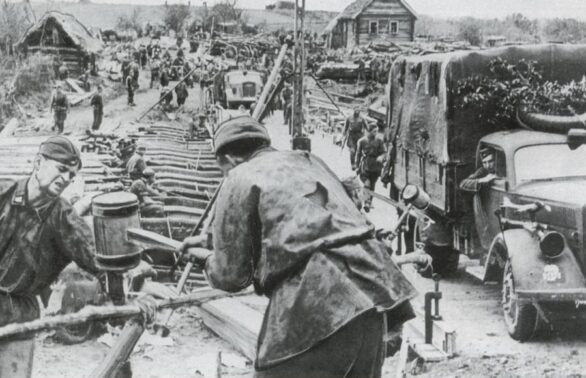 Engineers of the Totenkopf Division complete a pontoon bridge for the advance. 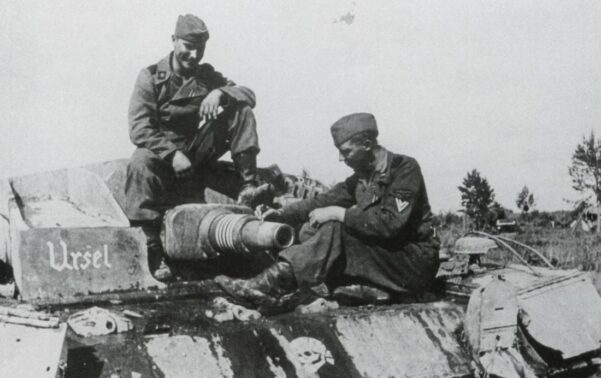 An StuG assault gun of the Totenkopf Division.

In August, the division fought fierce battles on the access roads to Leningrad and in particular on the Russian Luga defense line. Although the Russian 34th Army was destroyed, the Totenkopf Division lost over 4,000 men.

At the end of September, the division was at the center of a major Russian counter-attack near Lushno, where its units were deployed over a thin line 15 miles (ca. 24 km) long. The attacks were ultimately defeated, leaving behind a victorious, if shattered Totenkopf.
During these fights the SS-Sturmmann (Lance-Corporal) Fritz Christen received one of the most important knight’s crosses, which was ever awarded to a soldier of the Waffen-SS, for outstanding bravery. Christen’s anti-tank unit had been decimated by Russian tanks, and he operated his anti-tank gun for a full three days alone after the rest of the crew had fallen.
When relief troops finally arrived, these Christians found themselves alone, surrounded by one hundred dead enemy soldiers and 13 Russian tanks knocked-out. Christen received the award personally from Hitler, a rare honor for such a young soldier.

When the German advance in Russia came to a halt, the heavily weakened division had to dig in north of Demyansk and was completely on the defensive at the end of 1941. During this period many of their members were also involved in the fight against partisans, where no mercy was given and none was expected.
The ongoing fighting had reduced the Totenkopf to half its original strength by the end of the year.

In January 1942, Totenkopf was involved in a major Russian counter-offensive, which broke through by the army units on the flanks of the division. This was followed by one of the greatest battles on the Eastern Front, in the context of which the division will be named forever.
Totenkopf was trapped along with several army units around the city of Demyansk. Although the Germans were completely outnumbered, they held their positions stubbornly.
The very weakened Totenkopf was divided into two combat groups and after Himmler’s personal intervention was reinforced with only 400 soldiers flown in by planes. This help was more of a psychological than a practical effect.

By March 1942, the division had lost just under 13,000 men and 11 of its members were awarded the Knight’s Cross for bravery.
In April 1942, a German relief force made a narrow breach to those trapped in the Demyansk pocket. The usual paper strength of a first-class infantry division was 17,000 men, while the total strength of the six divisions under the supreme command of SS-Obergruppenführer Eicke in Demyansk amounted to only 14,000 men at this time.

When the encirclement was lifted, the fighting continued with undiminished hardship and by August 1942 the Totenkopf divisional strength was just over 2,700 men.
In November, what was left of the division was transferred to France for refreshment and recovery.

In the period from October 1942 to January 1943 the reorganization to SS-Panzergrenadier-Division Totenkopf took place, which practically corresponded to the structure of a Panzer Division type 1943.