Strength and organization of the Army, Air Force and Navy of Norway at the time of the German invasion in April 1940.

In 1939, after more than a hundred years of peace, Norway did not possess a large standing army and her government considered that effective national defense against a major power was impossible.
The Russian invasion of Finland in 1939 was a severe shock, and during the winter a sizable Norwegian force was established in northern Norway. After Russia signed an armistice with the Finns in March 1940, however, the force was disbanded.

When the Germans invaded on 8 April, the Norwegian Army was only partially mobilized and in the process of training new recruits. But despite these disadvantages, Norway put up a stubborn fight, and it was two months before the country was completely overrun and the British, French and Polish contingents evicted. The government finally capitulated on 9 June 1940.
Despite bitter fighting casualties had been light; the Norwegians lost just 1,335 killed and wounded. Small contingents of Norwegians managed to escape to England, while others crossed into Sweden.

King Haakon VII was Commander-in-Chief of a basically territorial army, which when fully mobilized, was to have had a strength of about 100,000 men. A small cadre of regular officers and NCO’s was responsible for running the Army and for the training of conscripts.
The country was divided into six Military Districts or Commands with their headquarters in Halden, Oslo, Kristiansand, Bergen, Trondheim and Harstad. Each Command was initially expected to field a brigade, later to be expanded to a division and garrison and ancillary troops.

An infantry regiment had a strength of 3,750 men armed with Krag-Joergensen M1894 rifles. Some regiments had a bicycle company for reconnaissance duties, which in winter became a ski troop. 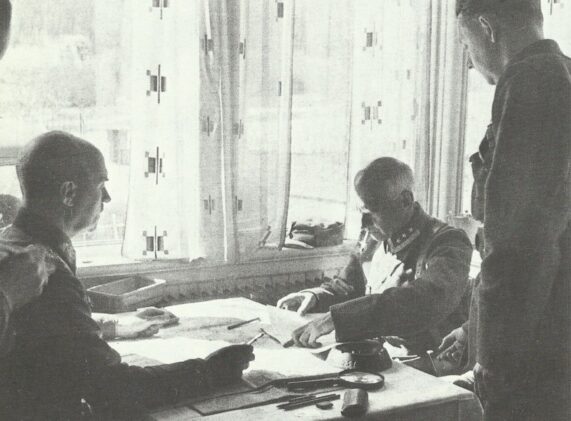 A Norwegian brigade commander signed the surrender of his unit. 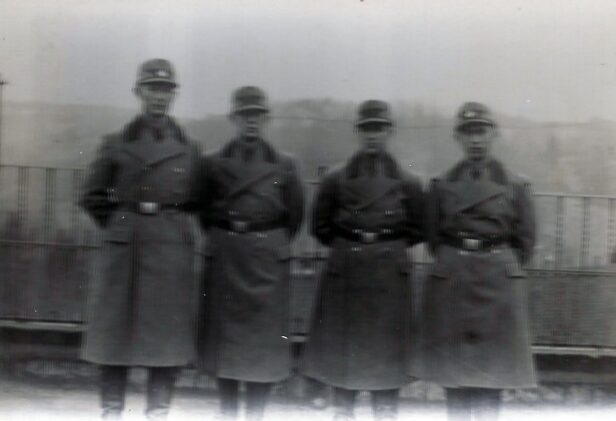 This photograpy of the author’s grandfather most likely comes from Norway and shows some Norwegians in uniforms.

By midday on 9 April 1940, the German armed forces had occupied nearly all the airfields and seaplane bases south of Narvik, and most of Norway’s semi-modem fighters (Gloster Gladiators) had been destroyed in the defense of Oslo on the opening day of the German invasion. Thereafter, the Air Force took little part in the fighting.

The Air Force was organized in three flights (one each of fighters, bombers and reconnaissance aircraft) with a total of 76 aircraft and 940 men, and was intended to play a ground-support role.

On 8 April 1940, the day before the German invasion, 5,200 officers and men were serving in the Navy and its Air Service. Despite the fact that the bulk of the vessels of the Norwegian Navy were obsolete, they gave a good account of themselves, during the hostilities with Germany. Indeed, during the fighting most of them were put out of action or sunk.

Only 13 of these made British ports after capitulation.

On 22 April 1940, while fighting was still in progress, the Norwegian Government decided to requisition the whole Norwegian merchant fleet still under its control. 1,000 ships (totaling 4,000,000 tons) manned by 30,000 seamen were saved for the Allied cause, and played an indispensable part in the Battle of the Atlantic.

In addition to the fleet there were coastal fortifications armed with guns of various calibers at Oscarborg, Oslofjord, Kristiansand, Bergen and Agdenes, which were manned by 308 officers and 2,095 other ranks.

The Norwegian Naval Air Service had been formed as early as 1915, and because of its small size necessarily played only a limited role in the war against Germany. Some Navy aircraft did, however, fly to northern Norway after the initial German attack, and they continued to operate from there until fighting ceased on 7 June 1940.