The Wiking-Division was the first foreign volunteer division of the Waffen-SS.

The SS Division Wiking had its origins in an order by Heinrich Himmler of September 1940 to set up a division with ‘Germanic’ volunteers from Holland, Denmark, Norway and the Walloon’s of Belgium.
To provide an experienced cadre, the ‘Germania’ regiment was transferred from the SS Division Reich to back up the new volunteer regiments ‘Westland’ and ‘Nordland’.
Originally the new unit was called SS-Infanterie-Division (mot.) Germania, but this led to constant confusion with the regiment of the same name and on 20 December the final name Wiking (Viking) was given.
Commander of the new division became SS-Obergruppenfuehrer Felix Steiner, a respected former army officer. In February 1941, the newly formed Finnish Volunteer Unit was incorporated to the Wiking Division as the ‘Finnish Volunteer Battalion of the Waffen-SS’.

Several weeks of intensive training at Heuberg followed before the division was declared fit for action at the end of April 1941.
In mid-May, the division moved to West Poland to be deployed for the Operation Barbarossa. The SS-Division Wiking was part of the III Panzer Corps of the Army Group South.

About half of the division’s soldiers in June 1941 were volunteers from Belgium, Holland, Denmark, Norway, Iceland, Finland, the former Baltic States and other European countries. Some of them had already fought against the Red Army on the Finnish side during the Winter War of 1939-40.

The SS Division Wiking saw its first combat action in Russia in the area of Tarnopol. By August 1941 it had reached Uman, where it was part of the forces that closed the great pocket in which the Germans captured over 100,000 Russians.
Together with the Hermann Goering Division of the Luftwaffe, the Wiking Division stood in battle at Korzun and crossed the Dnieper until 21 August.

Then Wiking was subordinated to the XIV Panzer Corps and marched towards Oktjabrisk. By the end of November 1941 the Mius was crossed near the Sea of Azov and the area north of Rostov was reached. At this time, however, the German offensive was weakened by the onset of winter and the division was forced by enemy counterattacks into the defensive at the Mius.
Between January and June 1942 Wiking stood at the Mius in the defense.

In June, the division was strengthened by 3.(gp)/Pionier-Bataillon (armored engineer battalion) with armored infantry fighting vehicles and the 3.(gp)/Kradschützen-Panzer-Aufklärungsabteilung 5 ‘Wiking’ (armored motorcycle recon detachment), also with light armored infantry fighting vehicles in one company.
In addition, there was the SS-Flak-Abteilung 5 (anti-aircraft detachment) and die SS-Panzer-Abteilung ‘Wiking’ (tank detachment). The latter was set up in February 1942 in Fallingbostel and Wildflecken with four tank companies and was originally intended for the SS Division Das Reich, which at that time was transported from Russia to France. Therefore, the Wiking Division received this tank unit at short notice.

In July 1942 Operation Blue began, with which the German offensive in Russia was revived. This summer the SS Division Wiking took part in the furthest invasion of Russia, the advance via Rostov-on-Don to the Caucasus, in an attempt to win the oil fields there.
By the end of 1942 and with the advent of the next Russian winter, the SS Division Wiking had proved so successful in battle that it was granted the status of a Panzergrenadier Division. Deep in the Caucasus, their soldiers from all over Europe held their positions on the Terek.

The Stalingrad crisis forced the march into the Kotelnikowo area in December. Fights on the Manytsch followed and the retreat to Rostov, where further defensive battles took place between the rivers Mius and Donez.
The catastrophes of Stalingrad and of the allied armies around tore a large hole in the front and in February and March 1943 Wiking had to seal off the enemy who had broken through as far as Stalino and then smashed him up.
In March 1943 a battalion of Estonian volunteers joined the division, known as the SS Volunteer Panzer-Grenadier Battalion ‘Narva’. At the end of 1943 the battalion was renamed as III.(gp)/Panzer-Grenadier-Regiment 9 ‘Germania’ and became in 1944-45 an infantry fighting vehicle battalion.

In May and June 1943 a refreshment took place in the area of Kharkov. The division lost one of its oldest regiments when the ‘Nordland’ regiment was withdrawn to provide the cadre for a new division of the same name. From this regiment, however, the Finnish Volunteer Battalion (III/J) was sent back to Finland. But the division received the SS-Sturmgeschuetz-Abteilung 5 (assault gun detachment).

In August Wiking was involved in counterattacks and defensive fights at the Mius again and had to retreat finally over Stalino to behind the Dnieper.

On October 22, 1943, the unit was renamed in 5. SS-Freiwilligen-Panzer-Division Wiking (5th SS Volunteer Armored Division Viking) and thus became the first non-German division to be operated as a Panzer division. Although the division had numerous ‘Germanic’ volunteers, it always contained a good proportion of German soldiers. And also the reorganization to a fully Panzer Division lasted until June 1944.

The new year 1944 saw the Panzer division Wiking in the Ukraine and at the end of January 1944 it was trapped together with five other German divisions in the Cherkassy pocket. The pocket was surrounded by not less than 35 Russian divisions and was compressed to 80 square miles (100 square kilometers).
This time Hitler allowed the break-out attempt and Wiking as the only tank division in the pocket and well-equipped, led the strike south. After the moment of surprise had vanished, the Russians began violent counterattacks with tank support.

But the beginning of a snowstorm gave the German troops excellent cover and finally the broken out units reached the last barrier for rescue, the less than c.2 yards (ca. 183 cm) deep river at Gniloj and Tikits. Since there was neither a bridge nor a ford, the soldiers had to swim through the river, with a human chain helping the non-swimmers to cross. Many were torn away by the icy water, but most were safe. Thanks to the efforts of the Wiking Division and especially the Walloons of the Wallonia Storm Brigade, who formed the rearguard, 34,000 of the originally 55,000 troops were finally able to escape from the pocket by February 20, 1944.

However, as most of the equipment and heavy weapons was lost in the outbreak, the unusable remainder of the division was moved to Uman on 28 February and transported from there to the Krakow area in the Polish General Government.
At Lemberg the division underwent refreshing, creation of new subunits and final reorganization to a Panzer division. The 5th SS-Sturmbrigade ‘Wallonien’ was moved back to Germany. The II/Panzer Regiment 5 was rebuilt in Germany with Panther tanks.

The division commander, SS-Gruppenführer Gille, took charge in March of the ‘Kovel Section’, where between three and five thousand soldiers were trapped by strong Russian forces in the Pripet swamps at the end of March.
The 8th/Pz.Rgt.5 joined the Wiking Division at the beginning of April 1944 and broke through to Kovel with reinforcements at the beginning of April and strengthened the defenders there. Then attacking together with the 131st Infantry Division to release the pocket until 6 April.
Kovel was held until mid-April, when the decimated defenders with their wounded were withdrawn to the Lublin area.

In addition to the new Panther detachment (II./SS-Pz.Rgt.5), a new detachment with Panzer IV as I./SS-Pz.Rgt.5 arrived. The III.(gp) SS-Panzergrenadier-Regiment 9 ‘Germania’ was filled up with four companies with armored infantry fighting vehicles and the I.(Sf)/Panzer-Artillerie-Regiment 5 received 18 Panzer-Haubitzen (self-propelled artillery howitzers). However, in June the Estonian volunteers left the division to be used for the new 20th Waffen Grenadier Division of the SS.
From 1944 the division also had to be increasingly refreshed with volunteers and conscripts of the so-called ‘Deutschstämmigen’ (ethnic Germans) from Southeast Europe. 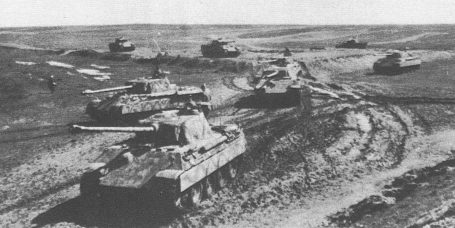 Panther tanks of the Wiking Division near Warsaw.

PzKpfw IV Ausf H of the Wiking or Totenkopf Division 1944. 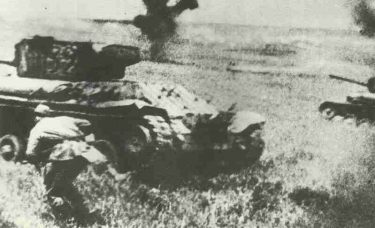 From the end of July, withdrawal to the river Bug and strengthening of the German defenses around Warsaw from August 1944, with Wiking helping to expel the Red Army from the eastern suburbs. Defensive position on the Narev until the end of December 1944.

On 30 December 1944 the SS-Panzer-Division Wiking was transported to West Hungary in the area of Komorn at the Danube. In addition, the division became also the I.(gp). Panzergrenadier-Regiment 23 ‘Denmark’ with infantry fighting vehicles subordinated.

After a counterattack south of the Danube, the division marched to Lake Balaton from 5 to 12 January 1945. An attempt was made to break through to the encircled Budapest from 18 to 28 January 1945, but this was brought to a halt by Russian counterattacks.
Northeast of Velence, the infantry fighting vehicle battalion ‘Norge’, together with the heavy tank detachment 509 with King Tigers and the 4th/tank regiment 1 of Wiking, destroyed more than 200 Russian tanks on 26-27 January. Retreat to Stuhlweissenburg and defense south of the town until 20 March 1945.

In March, the division took part in the unfortunate ‘Frühlingserwachen’ (‘Spring Awakening’) offensive at Lake Balaton, which was stopped in the mud of the thaw. Parts of the ‘Wiking’ combat group, together with the 1st Panzer Division and the remains of the 44th Infantry Division, were trapped southwest of Stuhlweissenburg when the Russian counteroffensive began. The break-out succeeded in western direction to Lake Balaton.
Until April 1945, the division was pushed back to Austria, where it received a number of Hungarian troops as replacements for its dwindling troop strength. From 2 April to 7 May 1945, defense at Fürstenfeld.

The mass of its soldiers went into British captivity on May 8, 1945, but parts of it also had to surrender to the Red Army in Bohemia.

A total of 54 members of the Wiking Division were awarded the Knight’s Cross.