The Republic P-47 ‘Razorback’ Thunderbolt was an out­standing fighter, both in the bomber ­ escort and ground-attack roles. It was the largest and heaviest single-engined fighter built during WW2 . It was the last in a series of aircraft that began in 1936 with the Seversky P-35 and included the P-43 Lancer in 1940.

Common to all these aircraft was their designer, Alexander Kartveli. In the Republic P-47 Thunderbolt he produced an aircraft that brought the formula to fruition and made up for less successful earlier attempts.
A total of 15,634 Thunderbolts were built in several versions. The ‘Razorback, as the first models were called by pilots and ground personnel, was employed intensively by the USAAF and RAF.

After initiating the unlucky P-43 Lancer project, chief Republic designer Kartveli began work in 1939 on two other fighters derived from the Lancer. These were the AP-4 and AP­10. The AP-4 was derived from the P-35 and was powered by a radial engine, while the AP-10 was designed as a light fighter around the liquid­-cooled Allison V-12 engine.

Paradoxically, the massive P-47 Razorback was derived from the lightweight AP-10. For a single-seater the P-47 was a huge aircraft, weighing almost nine tons at take-off. Indeed, when Kartveli submitted the AP-10 design to the USAAC on August 1, 1939, it was rejected, and he was asked to develop a larger and more powerful version.
In November of that year the company signed a contract for two prototypes (the XP-47 and the XP-47 A) to be powered by liquid-cooled Allison engines.
The choice of this power plant turned out to be a mistake, however. Early combat experience from Europe had made it clear that fighters had to be heavily armed and armored, as well as offering higher performance. The Allison engine was not powerful enough, nor could it provide satisfactory performance at high altitude.

Pleasing study of an early Republic P-47 Razorback Thunderbolt model D flying with the 8th AAF’s 78th Fighter Group based at Duxford, UK. When the P-47 reached the Army some wag said the only thing it could do well was dive. Such feelings soon changed to respect, but the fact taht it was undeniably a juggernaut led to its enduring nickname. 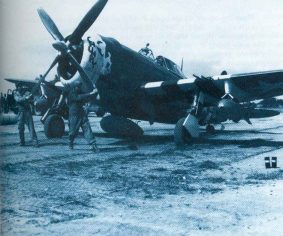 When first used in Europe the Republic P-47 Razorback Thunderbolt was given white stripes to distinguish it from a Focke-Wulf Fw 190. 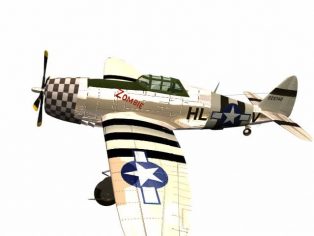 Kartveli therefore developed an alternative project around the most powerful engine then available, the new 2,000 hp Pratt & Whitney Double Wasp radial. He literally designed his aircraft around this large engine and its complex exhaust-gas­powered supercharger, submitting the scheme to the USAAC in June 1940. This time the project, the XP-47B, was accepted without reservations.
A first order for 773 aircraft, worth $56.5 million, was placed while the design was still on the drawing board. Of these, 170 were built as P-47Bs, 602 as P-47Cs and one as the pressurized XP-47E.

The prototype, the XP-47B, took to the air on May 6, 1941, after final adjustments to the engine and super­charger. During flight tests the Thunderbolt showed what it could do, reaching speeds over 410 mph (ca. 660 km/h) and climbing to 15,000ft (ca. 4,572 m) within five minutes.
It achieved these results at a take-off weight of almost five and a half tons.
In March 1942 the first production models started coming off the assembly line, and in April 1943 the 56th Fighter Group, attached to the 8th Air Force in Britain, was the first to take the new fighter into combat over Europe.

The P-47 Razorbacks Thunderbolts were successful escorting B-17 Fortress and B-24 Liberator bombers.

Production really hit its stride with the P-47D Thunderbolt, the most numerous variant. The P-47D’s engine gave more power at high altitude, and this version could carry a heavier bomb load. These Thunderbolts were built in several production batches and with a host of sub-designations.
Beginning with the P-47D-25, they incorporated a modification which had been introduced by the P-51 Mustang: a trans­parent teardrop canopy that gave the pilot 360° visibility.