Many claims have been made for the P-51 Mustang: that it was the best combat aircraft of the WW2, that it marked the transition from the piston-engined to the jet fighter, and that it was the type that gave the Allies final supremacy in the skies. The truth is perhaps slightly obscured by all these assertions. The P-51 was the product of two advanced technologies. The American aircraft industry, in 117 days, designed an airframe that was extremely advanced in structure and aerodynamics. The British engine industry, with its outstanding Rolls-Royce Merlin, provided the ideal complement. The P-51 Mustang would not have become immortal without the British engine, which had already made the Supermarine Spitfire famous.

A total of 15,469 P-51 Mustangs were built. The type destroyed 4,950 enemy aircraft in air combat and 4,131 on the ground in the course of 213,873 missions in Europe alone. P-51s also saw duty with the U.S.A.F. during the Korean War, and they served in the air forces of some twenty other countries. A few Mustangs are still flying in private hands today, notably the pilots of the U.S. Unlimited air-racing circuit.

In April 1940 the visiting British Purchasing Commission suggested to North American that Curtiss P-40 fighters be built under license for the R.A.F. The president of North American, J. H. ‘Dutch’ Kindelberger, was not enthusiastic. He said that his company could produce a fighter that was even better than the P-40 on the power of the same engine, the V-12 Allison V-1710. The British accepted the proposal but made it a condition that the prototype be ready in no more than 120 days because the situation in Europe was extremely serious. Two North American designers, Raymond Rice and Edgar Schmued, got to work at once. The resulting prototype, the NA-73X, was ready three days ahead of schedule, albeit without an engine and with wheels borrowed from an AT-6 trainer. The first flight took place on October 26, 1940. The aircraft had exceptionally pure lines and its performance was outstanding, with a top speed about 25 mph (40 km/h) greater than that of the Curtiss P-40.

Meanwhile, the U.S. Government had approved the R.A.F. order for 320 aircraft, provided that the U.S.A.A.C. was supplied with two examples for testing. The first production Mustang, which took to the air on May 1, 1941, remained at North American for technical evaluation. The second reached Britain in November and was officially designated the Mustang Mk. I. These aircraft, considered by the R.A.F. to be far superior to any other American fighter, were put into service in April 1942 in the tactical reconnaissance role. At the same time the British ordered another 300 which differed only in equipment and armament.

Despite its brilliant performance in flight tests with the U.S.A.A.C., only 50 Mustangs were ordered, for photo reconnaissance duties. Subsequently, however, 500 of the A-36A dive bomber version were ordered. These aircraft were delivered between September 1942 and March 1943. Another order was received for 310 P-51 As, deliveries of which began in the spring of 1943. However, the Mustang’s best days were still to come. The idea that led to the realization of the type’s full potential came to British and American engineers almost simultaneously. The R.A.F. gave Rolls-Royce four Mustangs for testing with the Merlin 61 engine. In the United States, meanwhile, two airframes were sent to North American for testing with the Merlin that the Packard company built under license, the V-1650-3. Thus, in September 1942, the P-51 B prototype came about.

The following spring saw the appearance of the main production model, the P-51 D. The R.A.F. had experimented with its Mustang Mk.III to improve the visibility from the cockpit. A frame less bubble canopy, the Malcolm (named after its inventor), was introduced. North American also tackled the problem, cutting down the fuselage decking behind the cockpit, adding to the vertical tail surface to make up for the loss of keel area, and fitting a teardrop-shaped, fully transparent canopy. A total of 7,966 P-51 Ds were built. This, variant was powered by a 1,700 hp engine and had a top speed of 437 mph (703 km/h) at 25,000 ft (7,620 meters). The fastest Mustang, however, was the next version, the P-51 H, which took part in the final operations against the Japanese and had a top speed of 490 mph (784 km/h) at 25,000 ft. A total of 555 Hs were built. 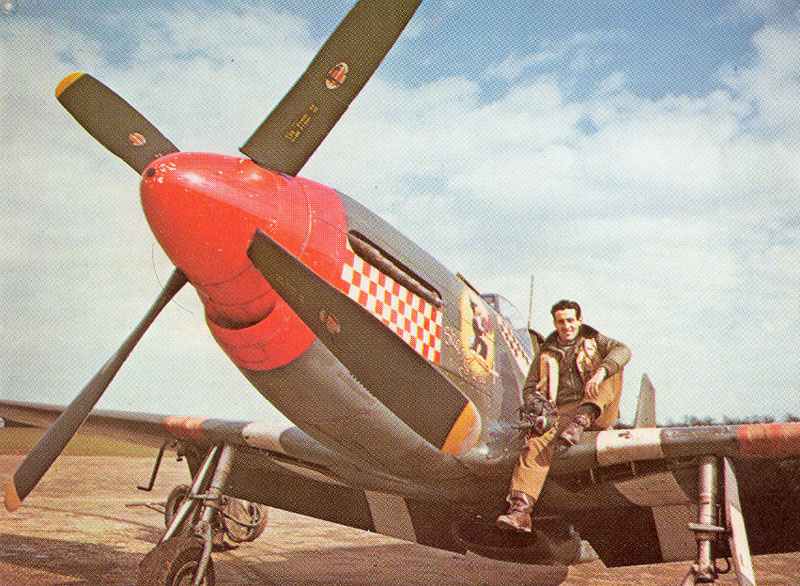 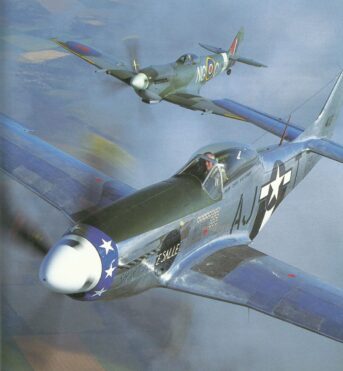 P-51D Mustang in front of a Spitfire LF.XVIe 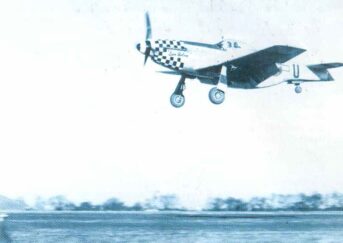 By mid-1944 the teardrop-canopy P-51 D was numerically the most important fighter in the 8th Fighter Command in England. This one probably belonged to the 353rd FG, based at Raydon, with the checkerboard marking in black and yellow. 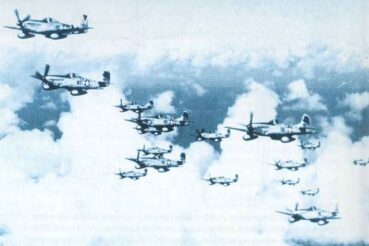 A swarm of P-51D Mustangs, each with two 91.6-gal drop tanks, giving a range in excess of 2,000 miles. These examples served with the 15th Air Force in northern Italy. 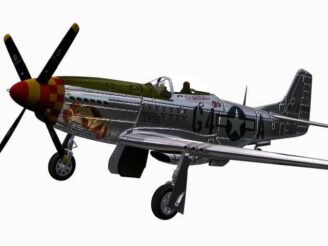 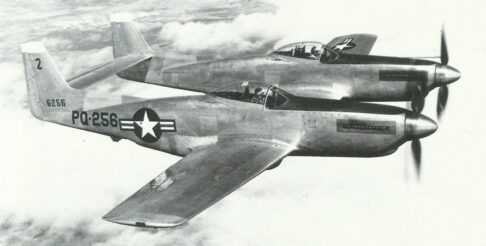