The Yak-9D played a leading role in wrestling air-superiority on the Eastern front away from the Luftwaffe – but more because of its numbers than of its power qualities.
However, no one was more aware than Yakovlev and his design bureau of the weakness of the Yak-9D design. The first attempt at a refinement of the Yak-9D were made in early 1943, but the unreliability Klimov M-107 engine delayed the project. It was an engine failure that was responsible for the loss of the initial Yak-9U (‘U’ for Ulutshshenny = improved) prototype on 25 February 1943.

The Yak-9U featured a further aerodynamically refined aft cockpit canopy with a modified aft fuselage deck contour. The oil cooler intake was moved from beneath the nose to the port wing root, an enlarged radiator bath was moved further aft on the under fuselage, and a supercharger intake was centered on the top decking of the engine cowling. Armament comprised an engine mounted 20-mm-ShVAK or 23-mm-MP-23W cannon and two 12.7-mm-UB machine guns, which fulfilled a long-standing desire of front line pilots for more firepower.

Continuous problems with the M-107A engine forced the first production batches to be powered with the reliable M-105 PF-3 engine.
Additional changes had to be made, the wing was moved forward 3.9in, fuel capacity was increased to 78 Imperial Gallons and a VlSh-107LO propeller replaced the old VISH-105S type.

In the Yak-9U, the Red Air Force had a superb fighter equipping its fighter regiments with outstanding performance and handling qualities, which was considered to be nearly on par with its contemporary, the North American P-51D Mustang. 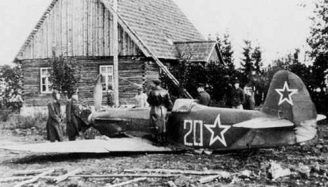 ‘Who is knocking at my door ?’, may have been the surprised question of this farmer in the Ukraine when this Yak-9U bellied in.

Post-war Hungarian pilots in front of a Yakovlev Yak-9P fighter.

The availability of metal alloys in large quantities during the second half of the war allowed for replacement of all wooden parts internally in the wing and the application of light alloy stressed skinning to the entire aircraft, including the wing. This Yak-9UT reached the front as Germany was finally collapsing.

When hostilities ended in Europa on 8 May 1945, the Yak-9UT had proven itself to be a superb fighter, but by Western standards lacked much of the essential equipment and instrumentation. However, in performance Yakovlev’s last piston-engined fighter development, the Yak-9P had matched the latest British and American standards and even offered limited all-weather capability.
The Yak-9P was introduced into fighter regiments during 1946 and featured new instrument panels. Many encountered in Korea.