Except for the first two variants of the Supermarine Spitfire (the Mk I and 2), it is a remarkable fact that the most used and, generally, the most successful variants of this fighter were those originally developed as ‘stop gap’ types. During WW2 it was not always possible to allow time to development and production of the best aircraft, and under the pressure of combat conditions, short-cuts were inevitable. Such was the case with the Spitfire V.

During the Battle of Britain in 1940 the Spitfire Mk I had barely maintained superiority over the German Me 109 E, and the few Spitfire Mk II’s that took part had but a small increase in performance over the Mk I. Therefore, in October 1940, the Air Staff of the Royal Air Force turned to the question of a replacement aircraft.

The intended successor to the earlier Marks was the Mk III, which had been under development since 1939, and had already flown. This aircraft had a number of significant features including a new wing design, a retractable tail wheel, and a Rolls-Royce Merlin XX engine. As a first step 1,120 Mk III’s were ordered in October.
However, it was realized that it would take some time to tool up for production of the new aircraft and thus, as an interim measure, Rolls-Royce were asked to install the new Merlin 45 engine into the basic Mk I airframe to produce the Spitfire V (the Mk IV designation having already been allocated to a Griffon­-engined version of the Mk III).
The first V to enter service, was delivered to No 92 Squadron early in December 1940.

Only ninety-four of the variant VA with eight 0.303 Browning machine guns were produced, all others were VB armed with two 20 mm cannons and four machine guns. In the course of events the III was to be cancelled, and some special features of that version were incorporated into the Mk V, of which a total of 6,464 fighter versions were built between 1941 and 1943.
The aircraft saw service with more than one hundred and forty squadrons of the RAF and was supplied to nine foreign countries, including the United States. It was employed on all battle fronts during the war and, in many cases, was instrumental in turning the tide of the air war in favor of the Allied forces.

In the first few months of 1941, the Spitfire V went into service with Nos. 41, 54, 64, and 91 Squadrons. During May, the first Messerschmitt Bf 109 F was encountered in combat, and the Mk V was publicly announced. By this time, production was under way. The aircraft were rapidly introduced into the squadrons, and by the summer the RAF was on the offensive over the Low Countries of Europe. The offensive took the form of fighter sweeps and daylight bombing by Blenheims and Stirlings, the Spitfire V’s providing escort cover. By September, twenty-seven squadrons were equipped with the Mk VB.
To use the Spitfire as a fighter-bomber or with extra fuel tanks to escort the bombers, the Mk VC came off the production line later in the year. 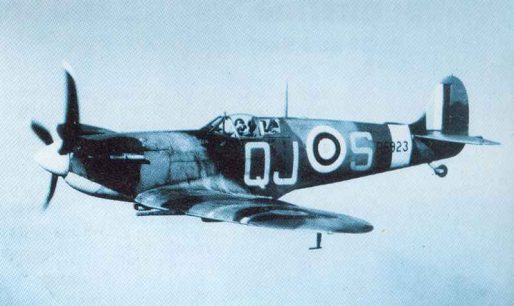 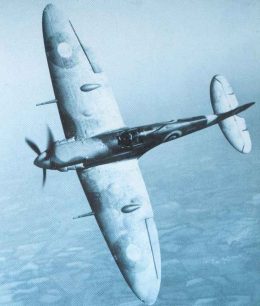 An unusual angle on a VB rolling towards the photographic aircraft. There were no tabs on the ailerons, but there was one on each tail control surface. 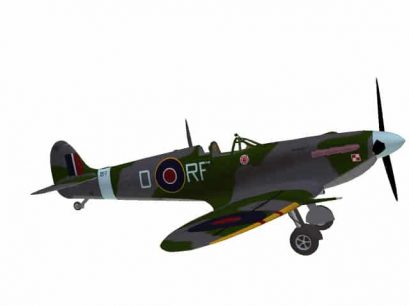 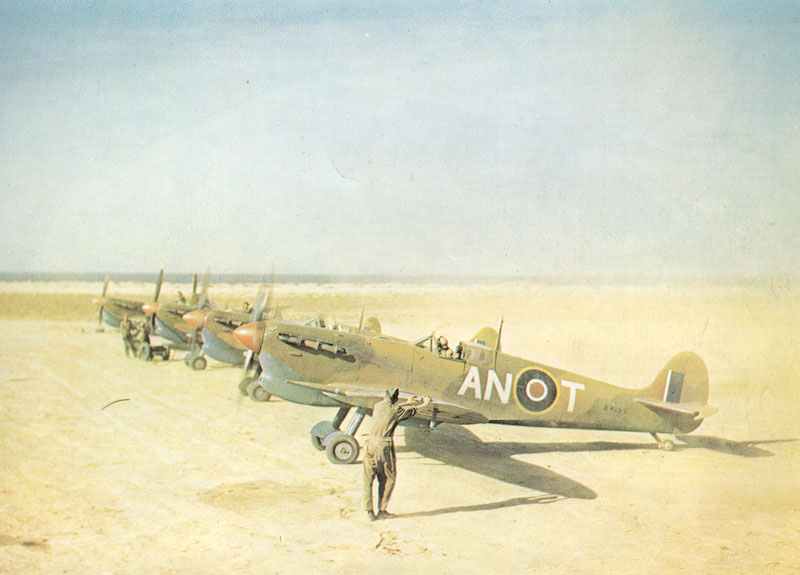 Fine scramble picture of a section of 417 (RCAF) Sqn in Italy, 1943. The aircraft are tropicalised VC ‘s, among the slowest variants ever to be used.

By the beginning of 1942, over 1,700 V’s had been built. In January, Westland Aircraft built their first VB, AR318, and shortly afterwards, Super­marine phased out the VB in favor of the VC. Castle Bromwich followed suit in the autumn, when they were producing eight to ten aircraft per day. Over 3,300 V’s were built in 1942.

The early months of this year were marked by a series of disasters suffered by British forces in the Pacific, the North African desert, and the English Channel; all these events having an effect on the development and use of the Spitfire.
Prior to September 1941 the aircraft main opponent was the Messerschmitt Bf 109 F. Although this aircraft had slightly superior fighting qualities above 20,000 feet (ca. 6,096 m), its armament was light, and generally the Spitfire V was the better of the two aircraft.
Then, in September, the first of the new Focke-Wulf Fw 190‘s were met in combat over France. Except for the smaller turning radius of the aircraft, the Fw 190 was superior in all other respects.

In February 1942, the Germans sailed their three capital ships, the Scharnhorst, Gneisenau and Prinz Eugen through the Channel to return to Germany.
During the resulting air battle the Spitfires tangled with large numbers of Fw 190’s and from then on there was absolutely no doubt that the aircraft was outclassed by the Luftwaffe‘s new aircraft. The answer was the Spitfire Mk IX, developed as another ‘stop-gap’ using the Spitfire Vc airframe with the more powerful Merlin 61 engine.

However, the Mk IX took time to bring into service in large enough numbers, and by June there were more squadrons of Mk V’s in service than at any other period of the war: fifty-nine in the United Kingdom, and seven in the Mediterranean area.

In August 1942 the first V’s were used in North Africa. The aircraft found themselves opposed by the Bf 10 9F (and later the Me 109 G model) and the Macchi C.202 Folgore. Since most combat was done on low altitudes there, the aircraft had little trouble with the Bf 109 F, although the Me 109 G was somewhat faster than it. Against the Italian MC.202 it seemed that the two aircraft were fairly evenly matched; the Italian, while superior in climb at low altitudes, was seriously under-gunned.

In the Far East, against the Japanese Mitsubishi A6M2 Zero, the aircraft was the first time outmaneuvered by an opponent, although it had superior level and diving speeds.

The last Spitfire V from Supermarine was built in July 1942 (at other factories build until 1943) and in September 1944 there were none anymore in operational units.