During the 1930s, the concept of a twin-engined, heavily armed high-speed long-range fighter was born in Germany. The idea behind it was that this ‘heavy fighter’ should have enough power and armament to penetrate deep into enemy airspace to fly long-range missions to escort bombers or long-range patrols. The designation, which the rather challenging specification of the Reichsluftfahrtministerium (RLM) provided for this aircraft, was ‘Kampfzerstörer’ (‘battle destroyer’).

This specification was later replaced by two separate ones, one of which became the Ju 88. The destroyer, on the other hand, should be able to fight both bombers and single-seater fighters and compensate for the possibly lower maneuverability by higher firepower. With long range they should be able to accompany bombers in their raids on the enemy hinterland.

The Messerschmitt Bf 110 (or Me 110) was developed from 1934 onwards to meet the heavy fighter (destroyer) requirements and the prototype Bf 110V1 first flew on 12 May 1936, powered by two 910 HP DB600 engines.
Tested in Rechlin in early 1937, the Bf 110 achieved an excellent turning speed of 314 mph (505 km/hr), but was slow to fly and its maneuverability left much to be desired.
But the lack of engines meant that the first four Me 110A-0 pre-series aircraft had to be equipped with two 680 HP Junkers Jumo 210Da engines. This turned out to be unsatisfactory and the Bf 110B-0 with 710 HP Jumo 210G engines quickly followed. The armament of the Bf 110A consisted of four 7.92 mm MG 17 machine guns in the nose and an MG 15 of the same caliber in the rear cockpit.

Next came 10 pre-series Me 110B-0 aircraft, which were completed in spring 1938 with 670 HP Jumo 210G engines. These were used for the development of the first Bf 110 B-1 series aircraft. This included the introduction of the cleanly formed nose, which accommodated two additional 20-mm MG-FF machine guns.
Unlike other aircraft of the German Luftwaffe, these were not tested during the Spanish Civil War and were instead converted to B-2 and B-3 for pilot training.

Only a total of 45 B-Series aircraft were built before the 1,100 HP DB601A injection engine became available and was used for the subsequent C-models. The first production aircraft Me 110C-1 flew in January 1939 and the C-Series became the standard heavy fighter during the years 1939-40.
The Bf 110C-1 was introduced to the Luftwaffe in April 1939 and more than 300 planes were delivered by the end of the year.

During the Polish campaign the Me 110C mainly saw operations in the support role for ground troops. But soon the basic problem of the heavy fighter concept arose – at least for the types during the first half of the Second World War – that all twin-engined fighters were not fast and maneuverable enough to take on even halfway be useful in dealing with enemy single-seat fighters. Although the ‘destroyer’ was heavily armed, it could not easily use this armament against the more agile enemy fighters and was usually outmaneuvered.
This was demonstrated alarmingly during the Battle of Britain, where the Bf 110C became easy prey for the RAF’s Supermarine Spitfire and Hawker Hurricane. It happened regularly during these air battles that the Me 110C had to be escorted by Me 109 Emil single-seaters, while the Me 110 was expected to protect the bombers.
After about 200 Me 110C were lost, the failure of the destroyer concept became clear and the German Luftwaffe withdrew them from day missions against the RAF.

It is interesting to note that the heavy fighter or ‘destroyer’ concept could never be satisfactorily applied in daytime operations – quite in contrast to its later common use as a night fighter. Even in the later course of the war, when even more powerful engines and better aircraft designs were available, it was not very successful.
Probably the relatively still most successful twin-engined fighter during the Second World War was the American Lockheed P-38 Lightning. Although this aircraft was able to perform several noteworthy missions, the losses of the P-38 were high compared to other Allied fighters in the second half of the war. They were always better suited for quick raids and to disappear just as quickly afterwards before they were involved in air combat with Me 109 G and Fw 190.

After the removal from the escort duties for the bombers some of the first C-models were used as tugs for cargo gliders – among them the gigantic Me 321.
The Me 110 C-4/B became the most widely used version of the C-series and was used as a fighter bomber in support of Operation Barbarossa, the attack on the Soviet Union, in June 1941.
The aircraft was relatively fast and was armed with a 20 mm twin cannon and four 7.92 mm machine guns forward and one MG15 aft. In addition it carried 1,103 lb (500 kg) of bombs. The C-7 was identical, but had an external bomb load of up to 2,208 lb (1000 kg).
Although their performance as fighters was limited, the Me 110 C-4/B and C-7 were used above the Eastern Front as ground attack aircraft and were very effective mainly because of their good armament. This was also their usual purpose during 1941.

After the experiences of the summer of 1940, the operational role of the Me 110 was further developed away from the heavy escort fighter concept. The following Me 110D series used 1,100 hp DB601A engines and focused the aircraft on the role of light high-speed bomber and reconnaissance aircraft.
Variants included the D-1/R1 with long-range ‘dachshund belly’ tank, D-1/R2 with droppable auxiliary tanks, D-2 as a fighter bomber with up to 2,208 lb (1,000 kg) bomb payload and the D-3 as a long-range escort for ship convoys with auxiliary tanks. 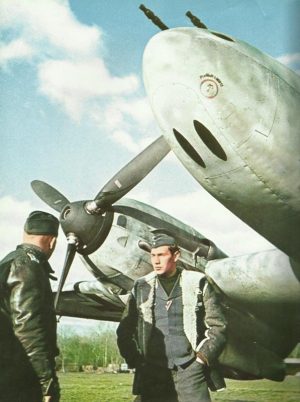 German heavy fighter Me 110 shortly before a mission over Scandinavia. 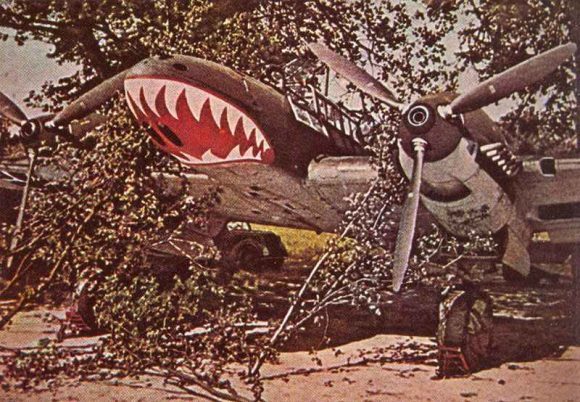 Although occasionally adopted by other units, the ‘sharkmouth’ decoration, shown on this Me 110 C, usually denoted aircraft of Zerstorergeschwader 76, the ‘Haifisch’ (shark) Group, which became operational in spring 1940. The concentration of forward-firing guns was formidable, but the Bf 110 was only light defended to the rear. 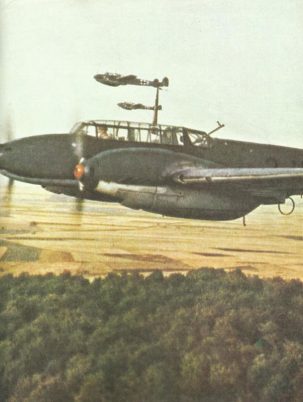 A formation of Me 110s on the approach to their target. 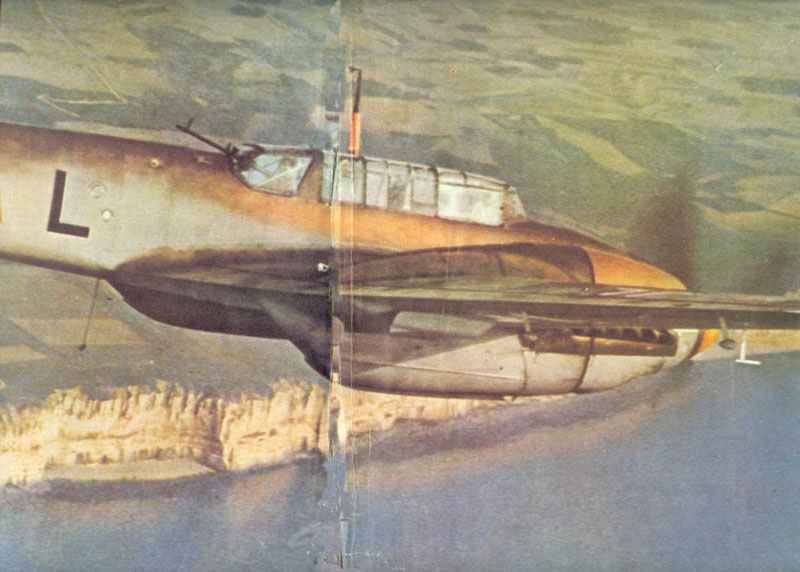 Messerschmitt Bf 110 over the cliff coast of Dover. 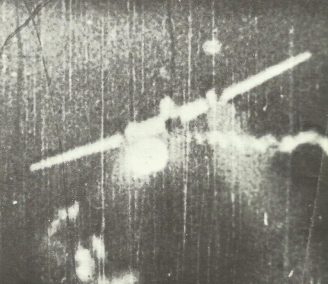 The port engine of a Me 110 is exploding by fire with tracer bullets by an British fighter. 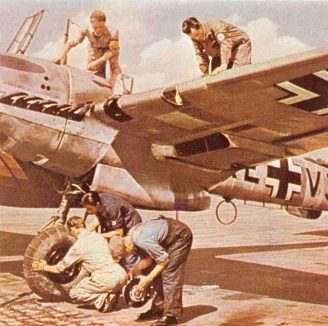 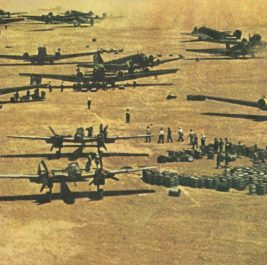 Supplies for the Afrika Korps by Ju 52s, which were escorted by Me 110 long-range fighters. 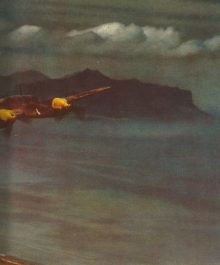 German Me 110 heavy fighters fly off the African coast. 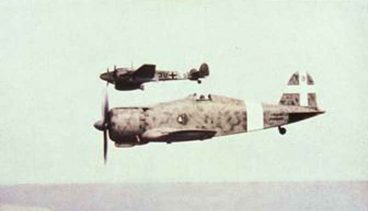 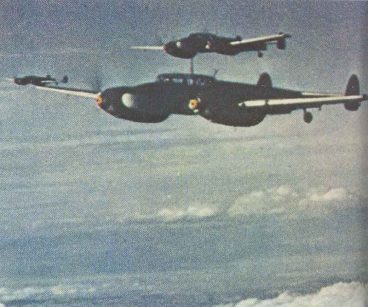 An unidentified trio of Me 110 D-type Zerstörer’s. They are probably from ZG26 newly assigned to the North African theatre. 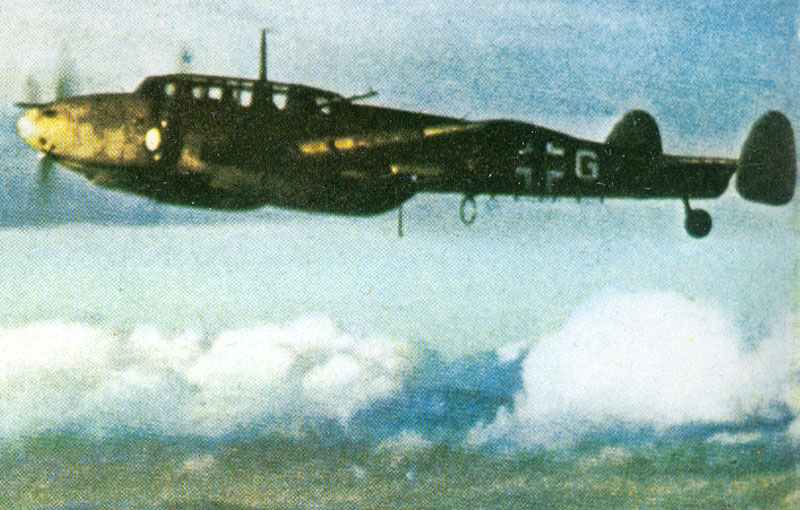 ^ climbing out of rugged territory in Sicily in 1942 to rendezvous with a bomber force for Malta. 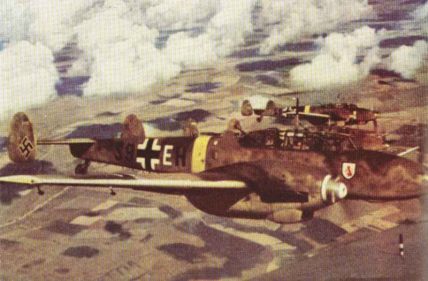 Brown is the perfect colour of this Me 110 Zerstörer over the Eastern front, with yellow theatre band.

Two Me 110 Fs in all-black night fighter finish and bearing the markings of Nachtjagdgeschwader 4. 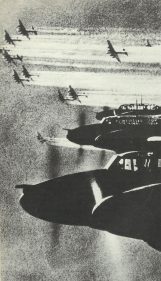 German Me 110 heavy fighters before turning on their target, B-17 Flying Fortresses. 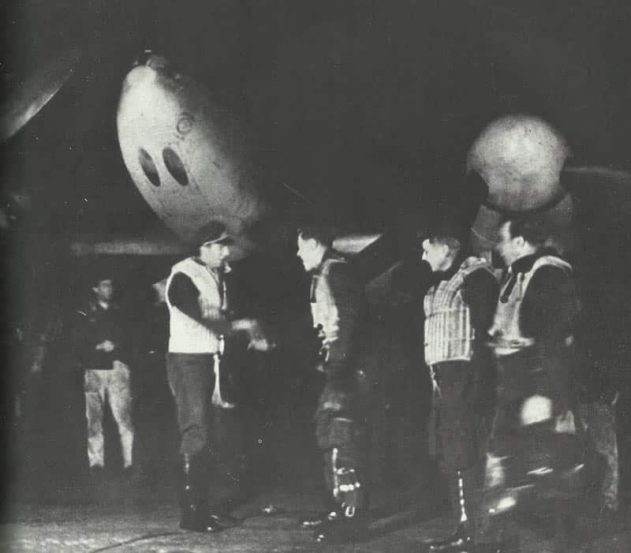 A Me 110 night fighters returned from a misison and the crew is welcomed. 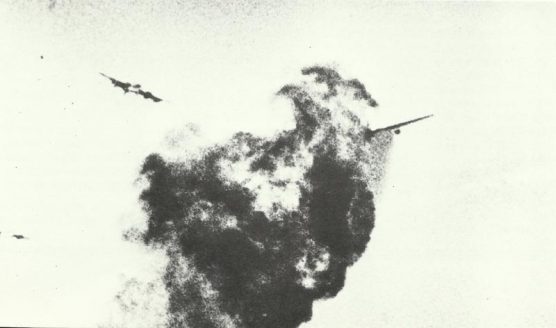 A Me 110 heavy fighter explodes after being hit by a US escort fighter. 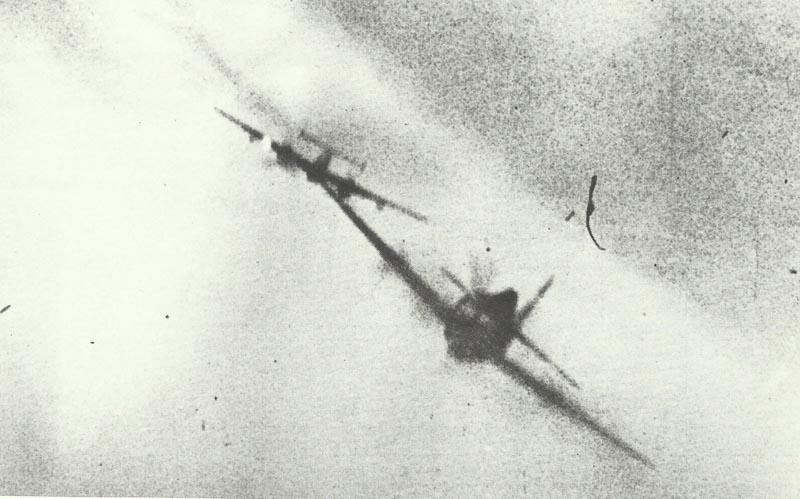 In the D-series, the heavy front armament of two automatic cannons and four machine guns was retained. In June 1941, the Me 110D-2 equipped the SKG 210 (Schnellkampfgeschwader 210) of the II Air Corps of Luftflotte 2 on the Eastern Front. These aircraft were used for high-speed bombing attacks on ground targets and airfields far into enemy airspace. In this new role they were successful and their heavy armament from automatic cannons also made them relatively successful tank destroyers.

The Me 110E series relied as standard on the 1,200 hp DB601N engines and appeared in the spring of 1941, with the focus now directly on the development of the Bf 110 as an ground combat support and reconnaissance aircraft. The basic design of the Me 110E-1 fighter bomber had suspensions for bombs and payloads under the wings and fuselage. The E-1/U2 could now even carry 4,4105 lb (2,000 kg) of bombs, while the E-3 was another reconnaissance version.
With the E-series also the successful career of the Me 110 as a night fighter began, when the E-1/U1 received infrared sensors.

In June 1941 Me 110E models were distributed among SKG 210 and ZG 26 (Destroyer Wing 26) of Air Fleet 2 on the Eastern Front. Although still classified as a group of ‘heavy fighters’, the ZG 26 flew its missions in the same way as the SSKG 210 in the fighter-bomber role.

On 21 June 1941, 201 (of which 148 were operational) twin-engined fighters and fighter-bombers were deployed in support of Operation Barbarossa, not including the Me 110 reconnaissance aircraft, which were all models of the Me 110C, Me 110D and Me 110E series, the majority of which consisted of the D-2 and E-1 versions.
Of these, a total of 83 were used with SKG 210, another 78 with the ZG 26 and 20 with the Erg./ZG 26. The remaining aircraft were staff aircraft with various dive bomber squadrons. In addition there were quite large numbers of Me 110C-5, Me 110D-3 and Me 110E-3 in numerous long-range reconnaissance groups, which supported Operation Barbarossa.

In the meantime the production of the Me 110 was shut down, because the new Me 210 was urgently expected for the heavy fighter role. However, as this caused problems and considerable delays, the Me 110F was released in the course of the year. With the exception of the F-2, which had two WGr21 rocket launchers under each wing, this was the same as the E-series, except for the new 1,300 hp DB601F engines.
The Me 110 F-4 of 1942 was the first version specially developed for night fighting. The aircraft had three crew members and, in some planes, two additional 30 mm MK-108 automatic cannons in a hull under the fuselage.

Until the end of 1942 it was clear that the Me 210 could not be a replacement for the Me 110. Therefore the production of the older model was greatly increased and the Me 110G equipped with DB605 engines was introduced.
The G-1 and G-3 corresponded to the patterns of the previous series, but the night fighter G-4 appeared with many different variants of gun positions and weapon calibres, including under-body nacelles, ‘slanting music’ and heavy cannons under the wings.
The G-4a, which was in service from autumn 1943, had the Lichtenstein C-1 airborne interception radar. The Lichtenstein SN-2 was installed in the G-4b and the old C-1 radar was removed from the G-4c.

The last series was the Me 110H and was produced parallel to the G series. Therefore the Bf 110 reaches its production peak in 1943 and 1944; probably a bit surprising after the experiences of 1940. In 1943 the production was practically tripled and this level was maintained in 1944. The last two dozen units were delivered during the first two months of 1945, which contributed to a total production of about 6,050 Bf 110.

The G and H models played a significant role in the night battles over the Reich in 1943-1945.