Following their unique unbroken selection of parasol monoplanes Morane­-Saulnier designed the M.S.405 privately to satisfy a 1934 requirements of the French air force Armee de l’Air. In contrast to similar fighter planes at the beginning of WW2 it was under-powered, with a lack of performance as well as considerably short of firepower. However, its early development supposed the fighter was undoubtedly accessible, while various other French fighter planes were mostly a wide assortment of prototypes.

Totally 17 M.S.405 were constructed, the majority of turning into prototypes of suggested upcoming variants and eventually offering the development of the Swiss 0-3800 series of fighter planes which, in contrast to the majority of 405s, was without a retractable radiator.
A unique characteristic was the point that aside from the fabric-covered rear fuselage, almost all of the covering was Plymax (light-weight metal bonded to plywood).

The M.S.406 had been the 405 production model including most of the requested improvements The fabrication was distributed out among the nationalized groups (Morane holding just a minor section of the manufacturing), with assembly lines at Bouguenais and Puteaux.
By the time of the armistice in June 194O certainly no fewer than 1,081 M.S.406 had been produced, even though a serious lack of engines. 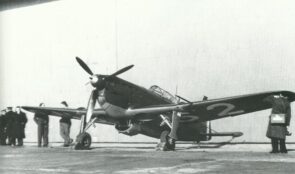 A Morane-Saulnier M.S.406 during delivery.

Comrades in arms, and neither adequate to face the Luftwaffe; an M.S.406C-1 together with a Fairey Battle light bomber of the British Advanced Air Striking Force.

In May 1940 the M.S.406 outfitted Nineteen of the Twenty-six French combat-ready fighter groups.
A person who flew one of them mentioned the M.S.406 was ‘free from habits, however not fast enough to get German airplanes and too poorly armed to shoot them down. Inadequately protected, our own losses were many’.

The Vichy-French forces installed 32gal (ca. 121 liters) drop tanks to Moranes transferred to Syria to combat the RAF. Numerous were in action in Finland, equipped with skis and commonly with Russian M-105P engines of more power (the so-called LaGG-Morane).