It was between December 1941 and July 1942 that the Flying Tigers, a unit of American volunteers operating in China, made the Curtiss P-40 fighter famous. Large quantities of these air­craft were subsequently built in the course of a long career. A total of 13,740 P-40s, in a dozen versions, came off the assembly lines between 1939 and 1944. They were used in every theater: in Europe, Africa, the Pacific and on the Russian front.
The Curtiss P-40 was never an outstanding aircraft, however. Like the Bell P-39 Airacobra, it was mediocre at high altitude, and for the same reason: the engine. Though its overall performance was not outstanding, it was nevertheless the most important American fighter in the first two years of WW2. It was the only aircraft available in large quantities (and therefore at relatively low cost) and with acceptable delivery times.

The War Department’s initial order for 524 P-40s, announced on April 27, 1939, created a sensation in American aeronautical circles. It was the largest combat-aircraft contract since 1918, and was valued at $12,872,898.
The contenders for the contract were Bell, Lockheed, Republic and Curtiss. The Curtiss type was given the contract chiefly because the company was already prepared to go into large-scale production. The P40 program employed all of Curtiss’ resources, and in 1941 the Curtiss Airplane Division began an expansion scheme that increased its factory area fourfold and brought the workforce up to a total of 45,000 employees.
The XP-40 project got under way in March 1937. The basic idea was to install an Allison V-1710 engine (12­cylinder V, liquid-cooled) in the air­frame of a P-36A, which had just gone into production. The tenth P-36A was accordingly modified and took to the air for the first time in October 1938.

Its overall performance in test flights was good if not outstanding: top speed was over 340mph (544km/h) at 12,000ft (3,750m) and a weight of 6,250 pounds (2,840 kg). This was better than the Hawker Hurricane but not as good as the Supermarine Spitfire or the Messerschmitt Me 109E.
The first P-40 production models, modified versions of the prototype, were ready in the spring of 1940, and about 200 were delivered to U.S. units by September. At the same time 140 export models, originally ordered by France but then turned over to Great Britain, were delivered. These were designated the Tomahawk Mk I and were assigned to training duties, the RAF regarding them as insufficiently armed and armored for combat.

The second version was the P-40 B (Tomahawk Mk II in the R.A.F.), which appeared in 1941. It had two more machine guns, armor for the cockpit, and self-sealing fuel tanks. These were the first P-40s to see combat duty. The British used them on the African front, and the Americans at Pearl Harbour and in China.

The famous shark-jaw symbol painted on the fuselages of the P-40s flown by General Clair Chennault‘s Flying Tigers was based on that devised by No. 112 Squadron of the RAF’s Desert Air Force. The first 100 P-40s sent to China were part of an order for Britain. In little more than six months of operations, the Flying Tigers flew these aircraft (together with about 30 P-40Es) on missions that resulted in the destruction of 286 Japanese airplanes. Only 23 Flying Tiger pilots were lost during this period.
A total of 131 P-40Bs were built, plus a few of the less effective P-40C.

In May 1941 the first of the substantially changed P-40D version appeared. There was a new engine, the fuselage and landing gear were smaller, the radiators were rearranged, and the forward part of the fuselage was modified. Almost all the 582 P-40D’s built were delivered to the R.A.F., which called this variant the P40 Kittyhawk I.

The second main production model was the more heavily armed P-40E, of which a total of 2,320 were built, beginning in 1941. The P-40E was the first variant to see service with USAAF units in Europe, where the type was employed in the Mediterranean theater.

The P40 Warhawk F, of which a total of 1,311 were built, also appeared in 1941. Powered by the Rolls-Royce Merlin from the Spitfire, built under license in America by the Packard company, this was the first version in which the engine problem was solved. The P-40 Warhawk version performed much better at high altitude. Not many Merlins were available, however, because priority was given to the superlative North American P-51 Mustang. Later attempts to improve the fighter’s performance led to the development of the lighter P-40K, P-40L and P-40M Warhawks. 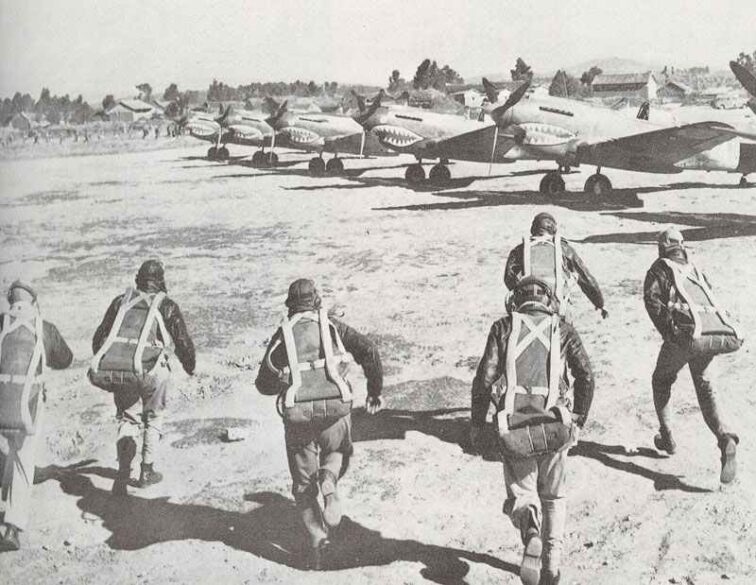 Pilots of the Chinese Flying Tigers are running to their planes. 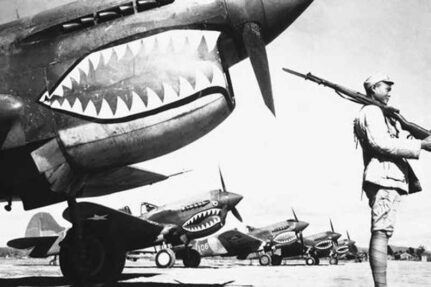 A Chinese soldier is guarding the fighters of the Flying Tigers. 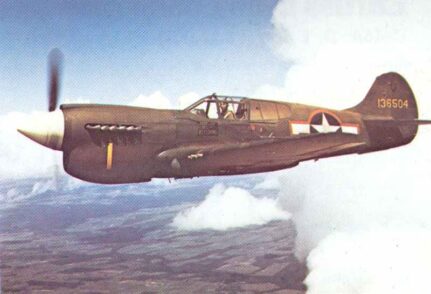 Air-to-air of a middle-vintage P-40 E wit the definitive armament of six 0.5in machine guns, two more than on the D. 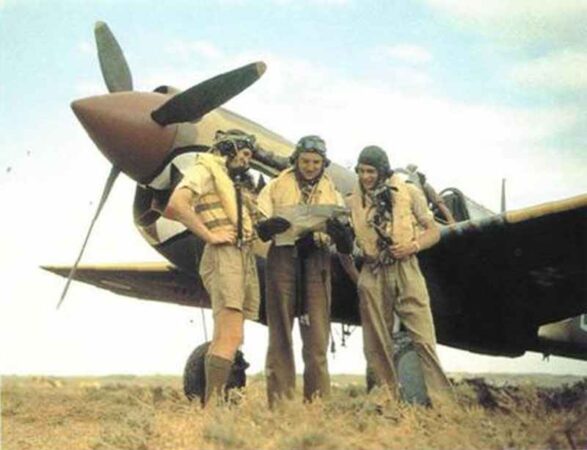 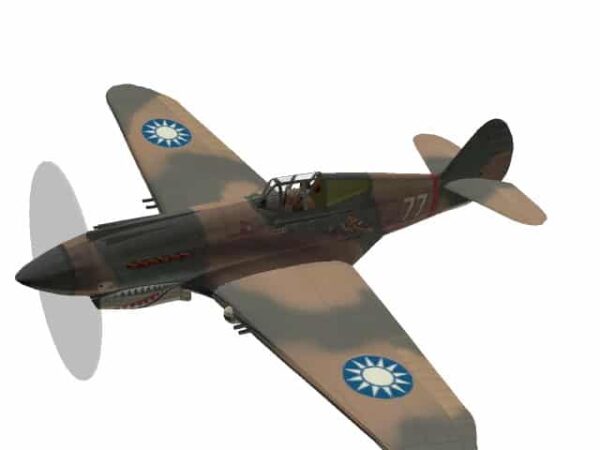