Though the A6M3 was an ideal fighter with the original high maneuverability of the A6M1 and higher speed performance than the Mitsubishi A6M2 Zero, the evolution of air warfare and the introduction of new generation 2,000-hp-class American fighters, like the F4U Corsair, Hellcat, P-47D Thunderbolt, P-51 Mustang and P-38 Lightning, forced more improvement of the Zeke (Allied code-name).

This was realized in the Mitsubishi A6M5 Reisen with enhanced speed and firepower. The engine was still the Sakae 21 from the A6M3, but modifications were made to the airframe. To improve speed without change of the engine it was necessary to shorten the wing span. Another measure to increase speed was the introduction of thrust-type individual exhaust pipes.

The first prototype of the Mitsubishi A6M5 Reisen made its first flight in August 1943 and reached a maximum speed of 351 mph (ca. 565 km/h). However, its horizontal agility was reduced and the endurance was only two and a half hours of cruising (8 hours with A6M2).
Nevertheless, the Japanese Navy adopted the Mitsubishi A6M5 Reisen, deciding it was suitable to the situation of the day. Mitsubishi produced 747 of it.

As one of the fire-power improvements, from the 465th A6M5, the wing cannon was replaced by Type 99 Mark 2 fixed gun Model 4 with a belt-feed system, carrying 125 rounds. Also, the wing outer skins were thickened to increase the limit speed in dive to 460 mph (ca. 740 km/h). The aircraft incorporating these changes were designated as A6M5a. Mitsubishi continued production of the model A6M5a until August 1944 during which 391 were built.

There were also a fighter-bomber versions of the A6M5 and A6M5a, which were converted by the Naval Air Arsenals or by field units. They were introduced into combat from the Battle of Marianas and eventually mainly used in Kamikaze-attacks.

It was five A6M5 fighter-bombers of the Shikishima Kamikaze unit that sank the US aircraft-carrier St Lo and damaged three others on 25 October 1944.

The production of the Mitsubishi A6M5 Reisen by Nakajima was started in November 1943, but the total number produced there is not known, though it was more than twice the numbers built by Mitsubishi.

The A6M5c had more powerful armament of two 13 mm guns added outside each 20 mm cannon in the wings and permanent equipment of fixed racks for 30-60-kg bomb under the wings. The port nose 7.7 mm machine gun was removed.
The panel arrangements of upper and lower sides of the wings outside the landing gears were extensively revised, while the under fuselage installation of the drop tank was changed to four-point support carrying a wooden tank with stabilizing fins. The protection was further improved with additional 55 mm thick bullet-proof glass and 8 mm thick armor plate behind the pilot seat.

The A6M5 set right earlier weaknesses in the Zero – insufficient armament, light structure and lack of protection for pilots and fuel tanks – but in the end proved no match, qualitatively or quantitatively, for the Allied fighters.

The final model A6M7 was a fighter-bomber version, used mainly for Kamikaze-attacks.

A final attempt to achieve parity with the Allied fighters was made with the A6M8 powered by a 1,560 hp engine. The prototype appeared in April 1945, but WW2 ended before the proposed production program with 6,300 aircraft could have been started.

Total A6M Reisen production amounted to 10,937, of which 6,217 were built by Nakajima which also designed and built 327 of the attractive A6M2-N single-float seaplane fighter version. 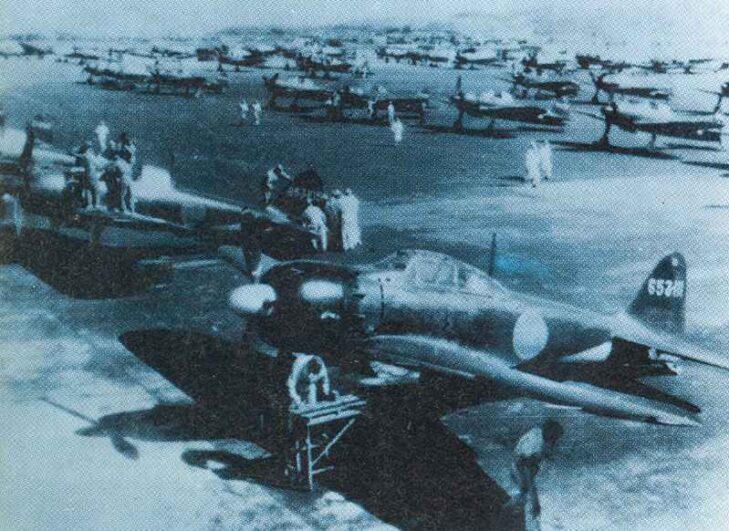 Nearly all Zeros on this picture are the Mitsubishi A6M5 variant.

These A6M5c Zero models belong to the 252nd AG, and are seen undergoing engine runs prior to their pilots strapping in anticipation of the next Japanese home defence sortie. The A6M5c had an additional 13.2 mm machine-gun in each wing, armour plate behind the pilot’s seat and self-sealing fuel tanks behind the cockpit. Despite this improvements, the aircraft was still no match for its American fighter opponents. 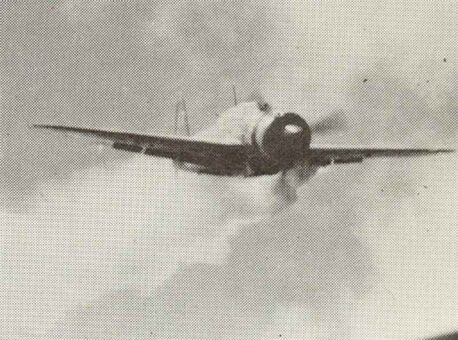 A Kamikaze plane during the attack on US warships. 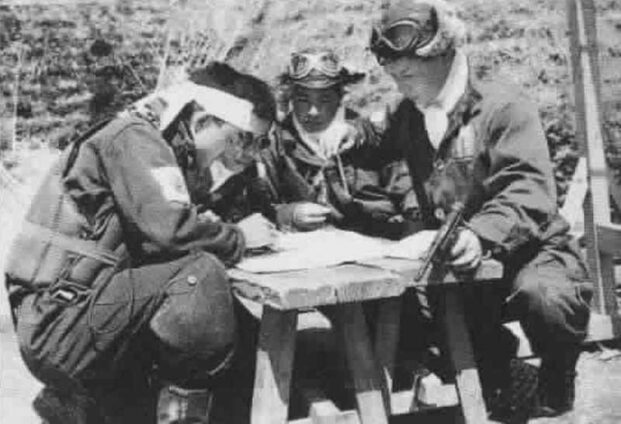 Zero pilots of the 203 AG study their day’s assignment at Kagoshima Naval Air Station in May 1945. On the left is Takeo Tanimizu with 32 air victories. 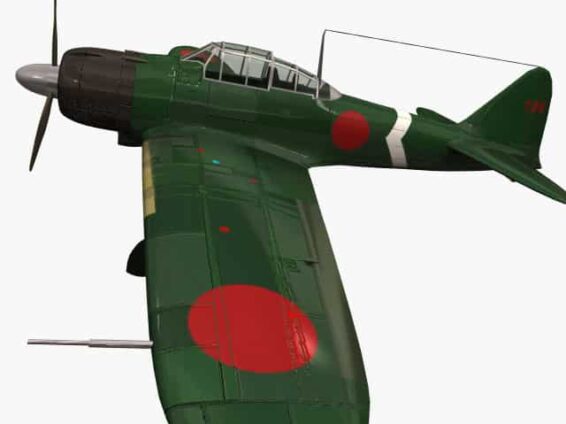 Dive bombing tactics using the example of Stuka. Following the tactics employed with the Junkers Ju 87 Stuka are described in detail; the dive-bombing methods…