One of the most rapidly conceived warplanes ever produced, the He 162 home defense fighter existed as a wooden mock-up within 15 days of the issue, on 8 September 1944, of the RLM requirement. Seven days later a huge production contract was placed; detail design drawings were completed by the end of October; and on 6 December 1944 – less than 13 weeks from initiation of the program – the He 162 V1 (or A-01) made its first flight. Dubbed, for propaganda pur­poses, the Volksjaeger (People’s Fighter), the He 162 was of attractive if unorthodox appearance and was built largely of wood and other non-strategic materials.

Its looks, how­ever, belied a dangerous instability and some vicious handling characteristics, and troubles were also encountered (as in the Focke-Wulf Ta154) with the wood-bonding adhesive used. Under the high priority given to fighter programs in 1944-45, manufacture of the He 162, under the code name Salamander, was assigned to numerous factories. It was planned to produce 2,000 a month by May 1945 and 4,000 a month ultimately, and about 800 were in various stages of assembly when the war in Europe ended. A further 280 or so He 162 A-0s, A-1s and A-2s had actually been completed. These differed primarily in their armament, the A-1 having two 30 mm MK 108 cannon in the lower forward fuse­lage and the A-2 a pair of 20 mm MG151s.

An example of Hitler’s ‘last-ditch’ attempts to re-equip Luftwaffe squadrons with jet fighters: a Heinkel 162 Volksjaeger of 3./JG1.

He 162 of I. Gruppe, Jagdgeschwader 1 at the time of the German surrender.

At one of the Heinkel underground factory plants an still unpainted He 162 Volksjaeger sits with canopy shattered after the surrender in May 1945. 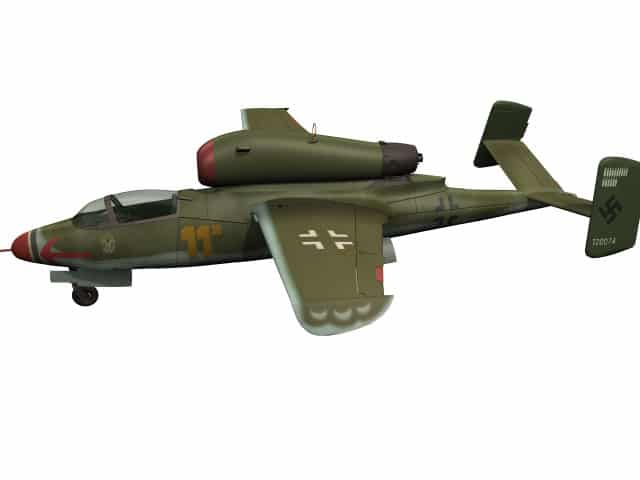 The first Luftwaffe unit to fly the He 162A was Erprobungs­kommando 162, which began to receive these aircraft in January 1945; but the first operational units, I. and II./JG I, were still working up at the beginning of May. Conse­quently, very few He l62s were actually encountered in com­bat. I./JG I was operational at Leck, though nearly without fuel. But it managed to shot down two Allied planes at the end of April, one of them a Hawker Tempest.

Proposed later versions included He 162A sub-types up to A-14, the He 162B (one or two pulse-jet engines), the He 162C (swept-forward wings), the He 162D (swept­back wings), and models with combined jet and rocket pro­pulsion.

Specifications for Heinkel He 162 A-2 Salamander (Volksjaeger)