F4U Corsair production continued for more than ten years, and the type remained in service until 1965. Total production was 12,571 aircraft. The Vought F4U Corsair was the best carrier-based fighter of WW2, in some respects out doing even the superlative North American P-51 Mustang. Yet despite these fine qualities, the F4U Corsair spent half of its operational career at land bases. For almost a year after the F4U Corsair entered service the US Navy considered it unsuitable for carrier duty.

Nevertheless, this formid­able fighter went on to chalk up an impressive tally of victories. In the Pacific theater alone, F4Us downed 2,140 enemy aircraft for the loss of only 189 Corsairs in the course of 64,051 missions. This kill ratio is unmatched in the history of air warfare.

The Corsair was developed early in 1938 at the request of the U.S. Navy, which ordered the construction of a prototype on June 30. The head Vought designer, Tex B. Beisel, set to work to build the smallest airframe compatible with the most powerful engine available. He chose the new 2,000 hp Pratt & Whitney XR-2800 Double Wasp 18-cylinder radial, which was then under development. A large-diameter propeller was needed to absorb the output of this powerful engine, leading in turn to the inverted gull-wing that characterized the Corsair. This kept the propeller disc at a safe distance from the ground, while keeping undercarriage leg length within reason. This last requirement was extremely important to the design of an undercarriage capable of standing up to the stresses of carrier deck landings.

The prototype, the XF4U-1, first took to the air on May 29, 1940, and proved to be an outstanding success from its first test flights. On October 1, during a ferry flight, this aircraft touched over 400 mph (ca. 644 km/h), making it the first American fighter to exceed this figure.

Rejected by the US Navy for carrier operations, the F4U was flown aboard USS Essex in December 1944, by Marine Corps fighter squadron VMF-124. 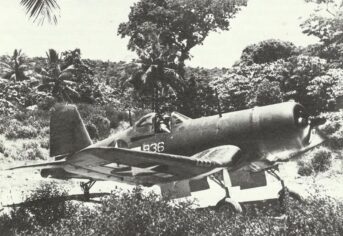 American F4U Corsair fighter-bomber on a airfield in the jungle. The aircraft is far superior to almost all Japanese fighters. 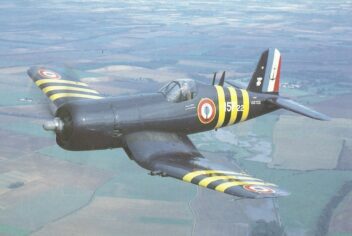 Some Corsairs are still airworthy. This is a F4U-7 of the last production series with four 20mm guns and a payload of up to 3,000lb with markings from the Suez conflict. 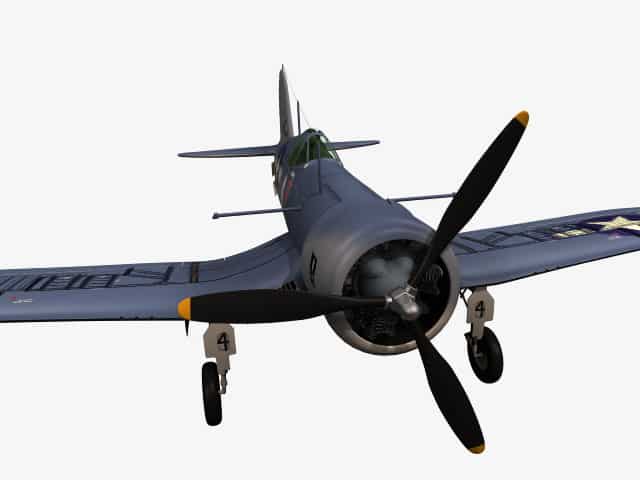 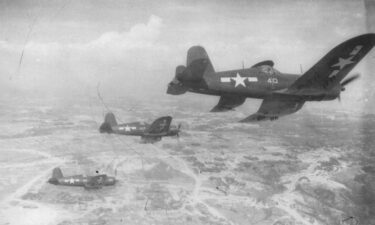 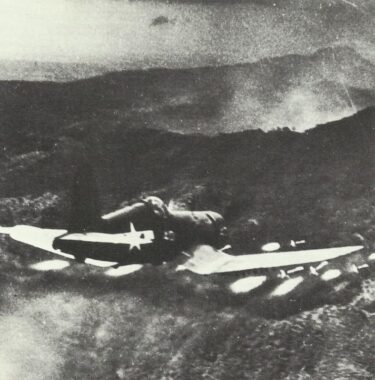 An F4U Corsair of the US Navy is attacking with air-to-ground rockets the Japanese positions.

F4 Corsair fighter burns on the flight deck of a British carrier.

The finishing touches, however, took a long time. To begin with, the armament was increased. This meant repositioning the existing fuel tanks and adding another in the fuselage. Then the cockpit had to be moved almost three feet back, creating visibility problems. It was this question of in­adequate visibility over the long nose that made the authorities hesitate about using the Corsair on carriers. Nevertheless, an initial contract for 584 F4Us was signed on June 30, 1941, and the first production model was ready a year later.

By the end of 1942 the Navy had taken delivery of 178 aircraft, though the Corsair was not used on carriers until April 1944, when it was finally considered suitable for deck operations.

The Corsair first became operational with the Marines, who used the type at Guadalcanal on February 13, 1943.
When the Navy got its F4Us, they were operated initially from land bases.
The F4U-1A sub-series had a different canopy for improved visibility, while the 1944 F4U-1D had a more powerful engine and heavier armament.
The Corsair F4U-1 was the most numerous variant: a total of 4,102 were built by Vought; 4,014 by Goodyear and 735 by Brewster.

Britain received 2,012 Corsairs and New Zealand 370.
The final version produced during the war was the F4U-4 with a 2,450 hp engine. Only a few of these entered service before the Japanese surrender.